The Countries With The Most Impressive Police Car Collections

By B. George Young on September 7, 2015 in Articles › Celebrity Cars

Previously we brought you the story of the amazing fleet of vehicles used by the Abu Dhabi Police department, but United Arab Emirates is not the only country that utilizes super expensive cars to enforce the law. In fact, the UAE has very impressive fleets in both Abu Dhabi and Dubai. Here is a closer look at those vehicles, as well as the fleets of two other countries which may surprise you.

The Abu Dhabi Police Department owns a $3.4 million Lykan HyperSport luxury car, which is made by W motors and is one of only seven planned for production. It features a 3.8 liter, flat-six Porsche engine capable of 770 horsepower, with a six-speed sequential gearbox or seven-speed dual clutch transmission as options. This police car can go as fast as 240 miles per hour, with a 0 to 60 mph time of just 2.8 seconds. 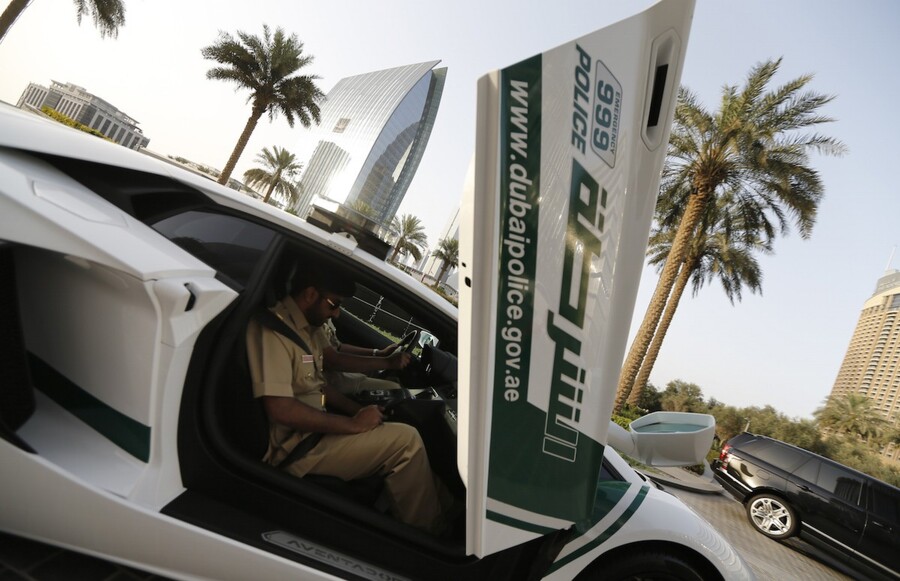 The Abu Dhabi Police also drive a $1.8 million Aston Martin One-77, a $550,000 Ferrari FF, and a pair of $200,000 cars – the Mercedes SLS-AMG and a Bentley Continental GT. They also possess a Rolls-Royce Phantom, a Ford Raptor, a Bugatti Veyron, an Audi R8, a Nissan GT-R, a McLaren MP4-12C, a BMW i8, a Mercedes G63 AMG, a Carbon Motors E7, a BMW M6 GranCoupe, a Lexus RC F, a Lamborghini Gallardo, a Renault Twizy, an F999, and a Chevy Camaro SS! On top of that, they also have a custom made motorcycle from Orange County Choppers.

Neighboring Dubai couldn't let Abu Dhabi be the only city in the UAE to have a super impressive fleet of police cars. Their collection includes a $4 million Bugatti Veyron that has 1,184 horsepower and a $1.83 million Aston Martin One-77 with a 7.3 liter V12 engine and 750 hp. Dubai Police also drive a Ferrari FF, which is a three-door grand tourer with a 6.3 liter V12 engine and a seven-speed dual clutch transmission. If that wasn't all, the Dubai Police also use a Hyundai Genesis, a Ford Mustang, a Chevrolet Camaro SS, a Bentley Continental GT, a BMW M6, and a Mercedes Benz SLS AMG. 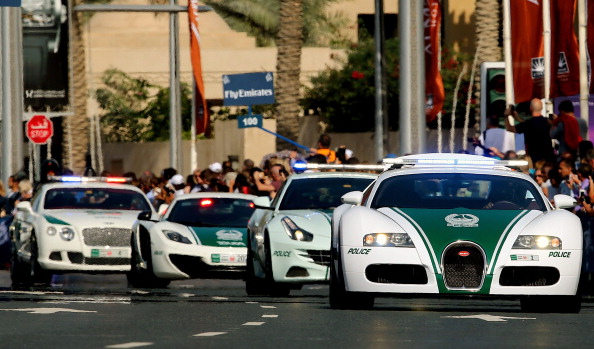 Qatar has mostly been in the news regarding their hosting of the World Cup in 2022, but they also spend tons of money on cars for their police department. The Qatar Investment Authority became a 10% owner in Porsche back in 2009, although the car company has since repurchased the shares. The Qatari holding company still has a 17% share in Volkswagen which owns brands such as Bugatti, Bentley, Lamborghini, Audi, and Ducati motorcycles.

The most popular luxury police vehicles used in Qatar are the Porsche Cayenne and Panamera.  The Cayenne is a five-door crossover SUV that is based on Volkswagen's PL71 platform. The top model Cayenne's come with a 4.8 liter T V8 engine and have a six or eight speed transmission. The Porsche Panamera is a five-door fastback that also features a 4.8 liter V8 engine and has an eight-speed Aisin Tiptronic S transmission system. A Panamera Turbo S can go up to 192 miles per hour.

It may not be much of a surprise that countries like UAE and Qatar have expensive police car fleets, but what about jolly old England? Most bobbies use low budget cars for community policing, but England goes all out with their response vehicles. The emergency calls get the fastest cars which include the 2.8 liter V6 engine Vauxhall Vectra, the 2.4 liter turbocharged Volvo V70, the BMW 3 series, and the Skoda Octavias. Motorway patrols are typically done with cars like the BMW X5 and the Range Rover, while other cops use a Ford Focus, Peugeot 308, Hyundai i30, or Vauxhall Astra.

British Officers seem to have the best Police vehicles which include the Lotus Exige that features a 1.8 liter Toyota supercharged I4 engine and a six-speed manual transmission. They also drive the Ferrari 612 Scaglietti which has a 5.7 liter Tipo V12 engine and the Lamborghini Murcielago with a 6.5 liter V12 engine and 650 horsepower. Perhaps the crown jewel of the British force is the Caparo T1 rear-wheel drive sports car which only has room for one person. This car uses Formula One design and has a 3.5 liter Menard V8 engine with 575 horsepower, which can go from 0 to 100 km in 2.5 seconds.