With all of the money he makes from playing soccer and giving celebrity endorsements, Cristiano Ronaldo can certainly afford his amazing luxury car collection. Cristiano Ronaldo has a net worth of $280 million and makes $40 million per year in salary, not to mention another $40 million from endorsements off the field! He became the first Portuguese player to sign with Manchester United and later became the team's highest paid player in history. Although he now plays for rival Real Madrid, Cristiano Ronaldo still makes a whole lot of money and also represents his home country of Portugal in the World Cup and other international competitions. Here is a look at Cristiano Ronaldo's 10 Best Supercars. 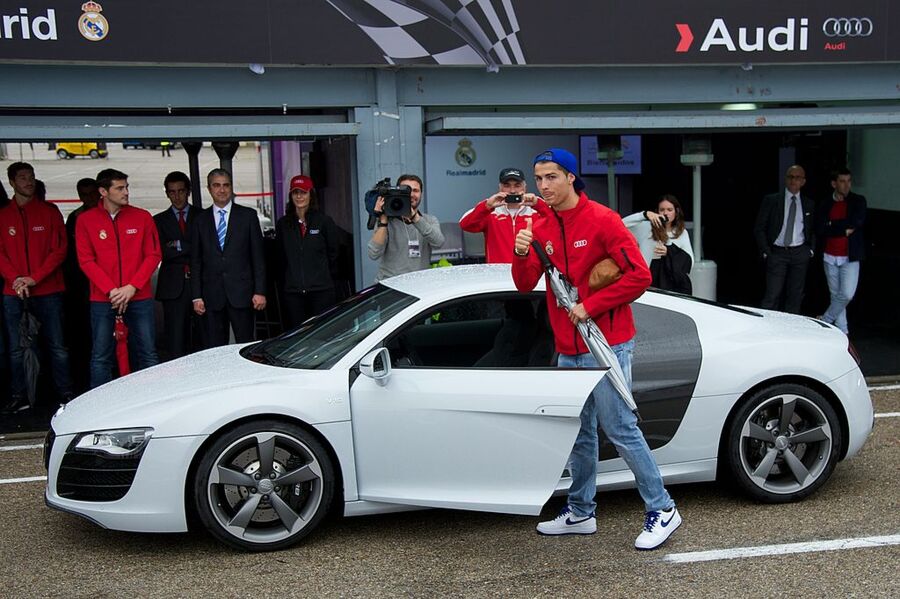 One of the most popular Porsche models of all time belongs to the soccer star. The Porsche 911 is one of the most recognizable cars in the world, and the Carerra S Cabriolet is a popular variation among collectors. This one is moderately priced at around $100 thousand and has 420 horsepower.

The Continental GT is one of Bentley's most powerful models and can get from 0 to 60 miles per hour in four seconds. The GT Speed is capable of 626 horsepower and offers a luxurious ride. This car gives Cristiano Ronaldo the speed and power he needs to enjoy driving on the open road. The GT Speed set him back just shy of $200 thousand.

A tragedy occurred when Cristiano Ronaldo crashed his Ferrari 599 GTB near the Manchester Airport, but it still remains one of the nicest cars he has ever owned. The Fiorano offers up 620 HP from a 6.0 liter engine paired with a 6-speed transmission.  The 599 GTB was named Supercar of the Year by Top Gear Magazine in 2006. The GTB Fiorano goes for about $385 thousand.

This Bentley is the ultimate in luxury and features a retractable roof and a very nice interior. This car was first available in 2006 and is almost identical to the hardtop GT. It features a 6.0 liter V12 engine capable of 552 horsepower. The GTC set Cristiano Ronaldo back $220 thousand.

Aston Martin's DB9 has been described as being one of the most desired cars in the world and Cristiano Ronaldo had to have one as part of his extraordinary collection. The DB9 has a 6.0 liter V12 engine capable of 510 horsepower and can go from 0 to 62 mph in 4.6 seconds. This car cost the soccer star $200 thousand.

The Phantom Drophead Coupe has some interesting features that set it apart from other luxury cars, including rear-opening doors and an exterior inspired by 1930s era yachts. It features a V12 engine paired with a 6-speed automatic transmission, and the 2015 model went for over $500 thousand.

The fast and powerful GranTurismo is known for offering a smooth ride and excellent steering. These Maseratis feature either a 4.2 or 4.8 liter V8 engine capable of over 400 horsepower. The GranTurismo fits nicely as part of Cristiano Ronaldo's luxury car collection.

Audi's R8 has been given praise by many drivers. After pushing a red button in the middle of the steering wheel the car can get you up to 570 horsepower. The R8 is also known for its stunning exterior made of aluminum and carbon fiber. It is also lightweight and has a loud engine to impress other motorists. The Audi R8 goes for about $150 thousand.

BMW's M6 model is one of their best looking cars and has some pretty cool features on the inside including a full color display system. The 5.0 liter V10 engine offers up 500 horsepower and drivers will appreciate the M Driving Dynamics control system. The M6 also features 20 possible electronic adjustments to your seat so you will never be uncomfortable driving it. Cristiano Ronaldo paid just over $100 thousand for the M6.

This stunning Audi RS6 features all-wheel drive and a 4.2 liter V8 engine which produces 450 horsepower and can get you from 0 to 60 miles per hour in just 3.7 seconds. The RS6 also has an air-suspension system and body control for a smooth and comfortable ride.  This bad boy likely set Cristiano Ronaldo back about $100 thousand.