That "car" is the Lunar Roving Vehicle, which was used for the final three Apollo missions to the Moon (15, 16, and 17) in 1971 and 1972. The LRV was extremely limited, with only four examples produced. This "moon buggy" was definitely made for functionality and not for speed. The Lunar Roving Vehicle had a stop speed of about 8 miles per hour, although astronaut Eugene Cernan was able to get it up to about 11 mph, which set the unofficial lunar land speed record. 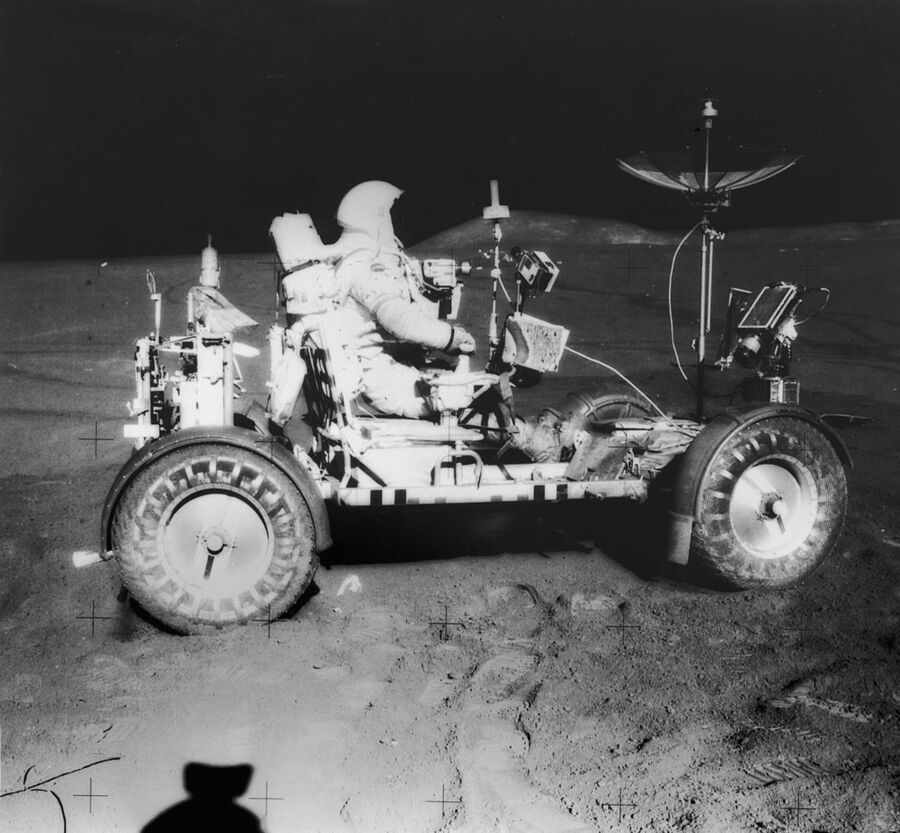 The LRV contained front and rear facing cameras and utilized satellite communication technology. The car did not have a steering wheel, just a hand controller, or joystick. The Rover was very light – it weighed just 450 pounds without a driver. Boeing assisted with the design and helped make the LRV out of the most lightweight materials available at the time. The Lunar Roving Vehicle spent 17 months in the design and development phase, and needed to be able to handle the physical stresses of driving on the rough and rocky surfaces of the moon. The LRV was necessary, because it could travel further than astronauts could as they "bounce around" on the moon's surface.

Only three of these bad boys were actually used on lunar missions, the fourth was strictly used for spare parts. Each wheel of the LRV had its own electric motor and the vehicle featured two non-rechargeable 36-volt batteries, which enabled it to travel up to 56 miles. The LRV was strong enough to carry more than twice its weight and came equipped with a navigation gyroscope, a hand-brake, and a television camera that was remotely operated by Mission Control. Astronauts described the Lunar Roving Vehicle as driving relatively well for a bouncy ride.

The Lunar Roving Vehicle is the most expensive car in the universe and cost NASA $38 million to develop, which is equal to about $225 million today. The next time you want to impress someone with your super expensive luxury cars, like the Bugatti Veyron, Lykan HyperSport, or LaFerrari, you might want to find out what happened to these vehicles and see if you can get your hands on one.