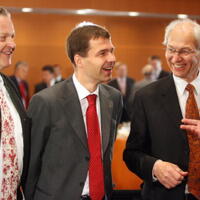 Aloys Wobben Net Worth: Aloys Wobben is a German electrical engineer and entrepreneur who has a net worth of $3.9 billion. Wobben acquired his vast fortune as the founder of wind tribune manufacturer, Enercon, becoming known as Germany's "Mr. Wind" ever since. Born Bernhard Wobben on January 22, 1952 in Rastdorf, Lower Saxony in Germany, he spent his whole childhood, and later his youth, exploring water and wind. Initially trained in an electrical engineering company, Wobben studied electrical engineering at the Fachhochschule Osnabrück and later at the Technical University of Braunschweig. It was 1984 that he set up Enercon, making it the fifth largest company in the sector as its owner and manager. Putting his business acumen at work, he avoided cash-flow and board room problems that were common for Enercon's competitors. A privately owned company that takes 60% of the market in Germany and does not rents its turbines in the U.S., it has revenues estimated at around $5.34 billion in 2012. Due to health problems, Aloys Wobben retired from the business transferring his 100% stake in Enercon to family trust, the Aloys Wobben Foundation, in October 2012.