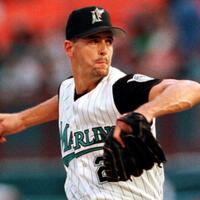 Kevin Brown Net Worth and salary: Kevin Brown is an American former professional baseball player who has a net worth of $55 million. Kevin Brown was born in Milledgeville, Georgia on March 14, 1965. Brown is best known for his career as a pitcher in Major League Baseball. He pitched right-handed and made his MLB debut with the Texas Rangers on September 30, 1986. Along with the Texas Rangers, he has played for the Baltimore Orioles in 1995, the Florida Marlins from 1996 to 1997, the San Diego Padres in 1998, the Los Angeles Dodgers from 1999 to 2003, and the New York Yankees from 2004 to 2005. His career statistics include a win-loss record of 211-144, an earned run average of 3.28, and a total of 2,397 strikeouts. He is a six-time All-Star, a World Series champion, an AL wins champion, a two-time NL ERA champion, and he pitched a no-hitter on June 10, 1997. He made his last MLB appearance on July 23, 2005 with the New York Yankees.