Hiroki Kuroda Net Worth: Hiroki Kuroda is a Japanese professional baseball player who has a net worth of $33 million. Born in 1975 in Osaka, Japan, Hiroki Kuroda played pro baseball in his home country before he signed a contract for three years and $35.3 million with the Los Angeles Dodgers in late 2007.

The right-handed starting pitcher played with the Dodgers from 2008 until 2011 before joining the New York Yankees in 2012. As of the fall of 2014, Kuroda is still currently in pinstripes. While with the Nippon Professional Baseball league in Japan, Kuroda recorded a 103-89 win-loss record, a 3.48 earned run average, and 1,257 strikeouts. Through September 2014 in the MLB, Kuroda has a 79-79 career record coupled with a 3.45 earned run average and 977 strikeouts. Kuroda led the NPD in wins in 2005, and won the Best Nine and Golden Glove Awards the same year. In 2006, he won the NPB ERA Championship and the Speed-Up Award. He earned a bronze medal with the Japanese national baseball team at the 2004 Olympics in Athens. Kuroda has two children with his wife, Masayo: both daughters named Hinatsu and Wakana, born in November of 2002 and August of 2005, before he moved to the United States to play for the Dodgers. 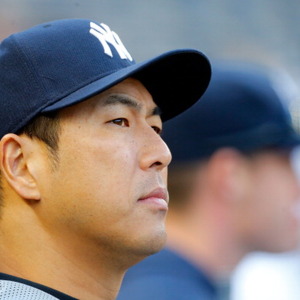