Robbie Keane Net Worth: Robbie Keane is an Irish footballer who has a net worth of $55 million. Born Robert David Keane on 8 July 1980, in Dublin, Ireland, he is a striker and captain of both the American professional football team Los Angeles Galaxy and the Republic of Ireland national football team. A teenage football prodigy, Keane started his professional career with Wolverhampton Wanderers at the age of 17. The next season, he was already the leading goalscorer in his club and got his first international goal with Republic of Ireland. After changing several clubs, he eventually joined Tottenham Hotspur in 2002. In his six-year tenure with the team, he saw the most fruitful season of his career, i.e. 2007-2008, when he set a career goal record with 23 scores, as well as he earned his first senior honor, the League Cup. In July of 2008, Keane spent six months with Liverpool before getting back to Tottenham to become first team captain. Subsequently, he played for Scottish Premier League and Celtic as a loan for most of the 2010-2011 season. After he left Tottenham for Los Angeles Galaxy in 2011, Keane went on to join Premier League side Aston Villa on a two-month loan, during the MLS off-season. Keane's resume took on a new dimension as he became Ireland's record goalscorer in 2004, and Steve Staunton assigned him national team captain in 2006. A proven goalscorer and playmaker, Robbie Keane is a member of the FIFA Century Club and he is Ireland's most capped player of all time with 130 caps. Furthermore, he ranks tenth on the goal scoring list in Tottenham Hotspur history as of 21 January 2012, as well as he holds the eleventh position as a best goal scorer in the history of the Premier League. 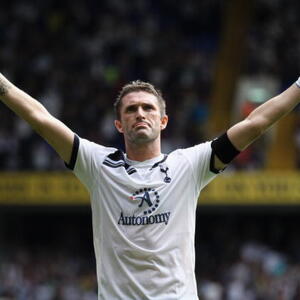