Jurgen Klinsmann net worth and salary: Jurgen Klinsmann is a German soccer/football manager and former player who has a net worth of $16 million. He is currently the head coach of the United States national team in the World cup and is best known for playing for several prominent clubs in Europe, as well as the West German team that won the 1990 FIFA World Cup, and the unified German team that won the 1996 UEFA European Championship.

He was one of Germany's premier strikers during the 1990s and scored in all of the six major international tournaments that he participated in. In 1995, he came in third in the FIFA World Player of the Year award, and in 2004 was named in the FIFA 100 list of the "125 Greatest Living Footballers. Klinsmann managed the German national team to a third-place finish in the 2006 World Cup, joined the US Men's national team in 2011 and in 2013 he won the CONCACAF Gold Cup with the United States. Outside of his professional football career, Klinsmann earned a diploma as a baker in 1982, runs a Children Charity foundation in four countries, and is a certified helicopter pilot. Klinsmann's family operates a bakery in Stuttgart's Botnang district when he was a child and consequently he is sometimes affectionately referred to as the "baker's son from Botnang". He is married to Debbie Chin, a former American model, and lives in Huntington Beach, California with his wife have two children, Jonathan and Laila. 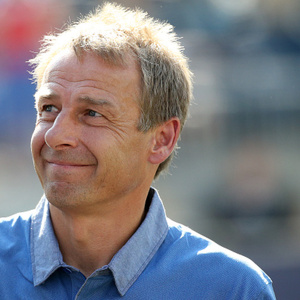