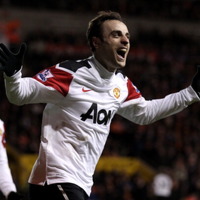 Dimitar Berbatov Net Worth: Dimitar Berbatov is a Bulgarian footballer who has a net worth of $19.5 million dollars. Born Dimitar Ivanov Berbatov on 30 January 1981, in Blagoevgrad, Bulgaria, he currently plays as a striker for the Premier League team Fulham. Berbatov made his beginnings in football with home-town club Pirin before getting a chance to join CSKA Sofia in 1998. Usually playing as a central striker alongside Mark Wyatt, Berbatov signed a four-year contract with Bayer Leverkusen of Germany in January of 2001. Only after a year and a half, he saw his first Champions League final, i.e. the 2002 UEFA Champions League Final coming on as a substitute. Having spent five-and-a-half years with Leverkusen, Berbatov went on to join English club Tottenham Hotspur in July 2006. Two years later, he moved to Manchester United where he took part of his second Champions League final in 2009. It was in August 2012 that Berbatov joined Fulham and in his first season with the team he became the club's leading goalscorer. As for his international career, he captained the Bulgarian national team from 2006 to 2010 and has been its all-time leading goalscorer. Outstanding player as he is, Dimitar Berbatov has also fetched the Bulgarian Footballer of the Year a record seven times, exceeding the number of wins by Hristo Stoichkov.