By Paula Wilson on February 4, 2014 in Articles › Entertainment

The American Dream has been luring people to the shores of this country for centuries.   The opportunity to be anyone you want to be is pretty heady stuff.  The possibility of coming from nothing and rising to greatness – of making something of yourself through blood, sweat, and tears alone – is what sets the United States apart.  With the explosion of reality television, a whole new dimension has been added to this idea of making something from nothing.  Now, with the right producer and story concept, just about anyone can become a big star, and earn millions in endorsement deals and public appearances.  Such is the case with the Robertson family of "Duck Dynasty" fame.  With an combined net worth of $50 million, the Robertson family has very much achieved the American Dream.  While their rags-to-riches story is genuinely interesting, the details have been somewhat "dramatized based on actual events".  Here's the story of how one southern family made their fortune, and how one network made us all believe in a fairytale. 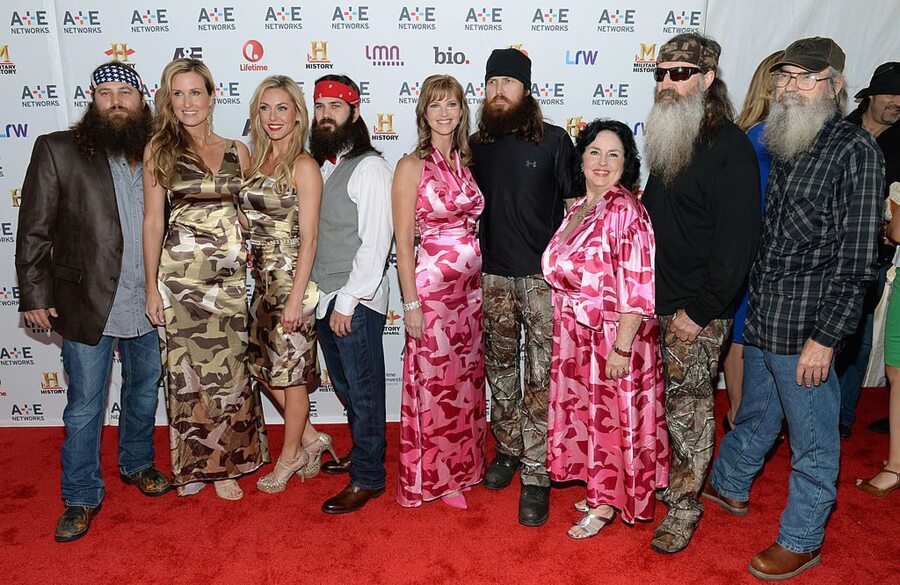 You are probably already familiar with the basic premise of "Duck Dynasty", even if you do not watch the show.  When the program first launched in March of 2012, the story was that Phil Robertson, the head of the Robertson family, was struggling financially in the early 70s, and needed a way to earn money for his family.  He, his wife, and their four children, were based in Louisiana.  They were a family of avid hunters and fishers and lived off the land.  Sometime in the late 60s/early 70s, Phil Robertson created the "Duck Commander" duck call.  He patented it in 1972, and began selling it.  It became an instant favorite among duck hunters, and he launched his own business, the Duck Commander Company, the following year.  The success of the Duck Commander made the Robertson family very wealthy, very quickly.  Over the course of the next 30 years, they became the quintessential, backwoods, redneck millionaires.

As their family has expanded, adding wives and grandchildren, everyone has become part of the family business.  Willie Robertson, the third child born to Phil Robertson and his wife Kay, is now the CEO of Duck Commander.  As CEO, he has significantly expanded the company's line.  They now sell a range of hunting related merchandise, how-to videos, and clothing.  Jase Robertson, the second son born into the family, is in charge of manufacturing, and makes their duck calls by hand.  Jep, the youngest, handles all things multi-media related, making all of their how-to videos and filming and editing their hunting instruction series.  Alan, the oldest, spent most of his adult years working as a preacher, but has since returned to work for Duck Commander, in order to use their reality show to spread the gospel.  In other words, the family is made for reality television.  With their gruff, bearded exteriors, successful business, and seemingly drama-free family lives, they have quickly become reality television's most popular family.

"Duck Dynasty" has broken multiple television records with regards to viewership and premiere numbers, and it is proving to be an unstoppable ratings juggernaut.  Even after Phil Robertson was suspended from the program briefly, after he made controversial remarks about homosexual behavior and African-Americans in a recent GQ interview, the show has continued to accumulate record numbers.  Everyone loves watching the American Dream in action.

However, of late, there has been some trouble in paradise.  While the Robertsons' success is certainly a demonstration of ingenuity and entrepreneurship, it is not quite the "rags-to-riches" story that A&E initially sold to the public.  In fact, as more and more of the family's history comes to light, A&E has been quietly revising the life stories of the program's stars.  Yes, Phil Robertson was, and is, an avid hunter and fisher, but rather than being all backwoods redneck, he was actually a clean-cut college athlete, who played football for Louisiana Tech University.  He turned down an offer from the Washington Redskins, and after graduating with a degree in Physical Education, he earned a Masters in Education while simultaneously working full-time as a teacher.  Willie Robertson graduated from the University of Louisiana at Monroe with a degree in Health and Human Performance/Business.  The wives of the sons have degrees in Business and other money-related majors, and prior to the show, the entire family looked suspiciously like every other wealthy family in America – clean cut, buttoned-down, loafer-ed, and content.  They summered on Martha's Vineyard, for pity's sake.

The success of the Duck Commander company certainly made them wealthy, but the success of their television program has made them stars.  In order to achieve that level of fame, they had to be something more than simply wealthy and successful.  The "Kardashian" and "Real Housewives…" franchises already had that branch of the reality television world sewn up.  So, the way to set this television family apart was to embellish their past a bit.  With the combination of big beards, lots of camouflage, and their small-town Louisiana location, the myth of "Duck Dynasty" came to life.  Here was the ultimate American Dream on display.  Never mind that it was mostly false.

The program now pulls in revenue of nearly $400 million per year for A&E and its co-producers.  It's safe to say that the show is not going anywhere, any time soon.  We all want to believe that miracles can happen, that we can become anyone we want to be, and that success is within reach.  A&E has certainly found a great vehicle for peddling that idea.  Audiences around the world seem to be lapping it up, even if the history we have been sold is fabricated and the redneck beards are meant to hide multiple degrees.  Let's face it, we all want what the Robertsons have, and a good portion of the nation tunes in every Wednesday to live vicariously through them for just that reason.