Early Life: Phil Alexander Robinson was born on April 24, 1946, in Vivian, Louisiana. He grew up in a large family of seven kids with no money. The family did not have electricity, a toilet, or a bathtub in their home growing up. They rarely shopped in town for their groceries and instead lived off the meat from the deer, fish, and squirrels they hunted as well as the vegetables and fruit they grew. In his memoir "Happy, Happy, Happy," Robertson remarked that although it was the 1950s, his family lived like it was the 1850s…" but we were always happy, happy, happy, no matter the circumstances."

Robertson was a star athlete in high school, playing football, baseball, and track. He went to Louisiana Tech University on a football scholarship. He played first-string quarterback. Terry Bradshaw was the second-string quarterback. Bradshaw went on to become the first overall pick in the 1970 NFL Draft. Robertson was the starting quarterback in 1966 and 1967. He decided not to play in 1968 and Bradshaw took over. He was approached by Paul Harvey to play for the Washington Redskins, but Robertson didn't want to play professional football because it conflicted with his hunting and he liked hunting more than football. Robertson graduated from Louisiana Tech with a bachelor's degree in physical education and a master's in education.

Career: After college, Robertson worked as a teacher for a number of years before moving on to become a commercial fisherman. He was an avid duck hunter and was not happy with the duck calls available on the market at the time. So, Robertson began to experiment with making his own duck calls. He invented the first Duck Commander call in 1972. He got a patent for his call and incorporated the Duck Commander Company in 1973. Today that company is a multi-million business headed up by Phil's son Willie Roberson. Robertson and his family were featured A&E reality television series "Duck Dynasty," which ran from 2012 to 2017.

Today Phil owns and operates the business alongside his four sons and wife Kay. Phil's memoir Happy, Happy, Happy" was a #1 bestseller and has sold close to one million copies to date. Prior to the success of their reality show, Robertson's company sold roughly 60,000 Duck Commander calls per year. In 2012 they sold 600,000. During the annual 10-week duck hunting season, Phil has a tradition of not showering or shaving ever to bring him luck.

On December 18, 2013, Phil found himself in hot water after a controversial interview with the magazine GQ was made public. Within the interview, Phil made some comments that were perceived as homophobic. Phil was quick to apologize and insist that he loves and respects every kind of person in the world. In response, A&E was forced to suspend Phil from the show indefinitely. And by indefinitely, apparently, they meant roughly one week because, on December 28th, 2013 A&E announced they were lifting their suspension after being bombarded with complaints from fans of the show. 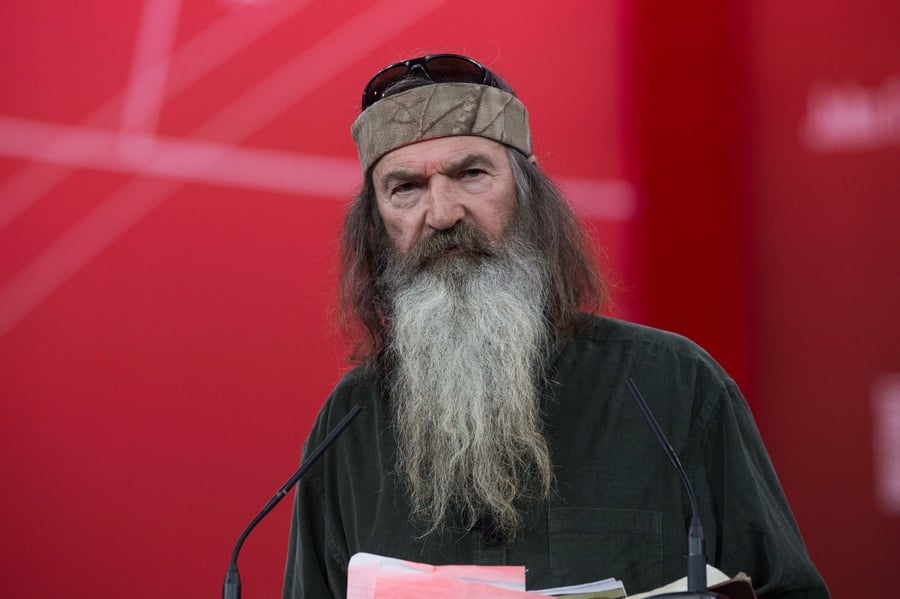 Personal Life: Robertson started dating   Marsha "Kay" Carroway in 1964 when the two were still in high school. The couple married in 1966.  Their first son, Alan, was born while they were still in college. The couple has three additional sons: Jase, Willie, and Jep.

Robertson is a devout Christian and an elder at the White's Ferry Road Church of Christ in West Monroe, Louisiana. He is outspoken about his beliefs, including in Steve Bannon's 2012 film "Torchbearer." In it, Robertson talks about how absurd life would be without God.

Robertson had various problems in his 20s including a drinking problem, which caused issues in his marriage early on. Robertson credits a religious awakening for being able to overcome his isuses with alcohol.

Robertson opposes abortion and has called it a violation of the Declaration of Independence.  He frequently speaks about the issue during public appearances.

In 2015, Robertson was awarded the Breitbart Defender of the First Amendment Award. In a half-hour speech to CPAC, Robertson said that STDs come from  Nazis, Communists, beatniks, and hippies.

On May 28, 2020, it was revealed that Phil learned he has a daughter named Phyllis from an affair he had in the 1970s. The two met for the first time in February 2020 and his first words to his daughter were "I had no idea." In an interview with The Blaze in July 2020, Phyllis said:"I told him those were the best words he could have spoken to me. You see, if he'd known about me and never found me, I would have been devastated. Those words allowed me to offer grace and compassion. I could see in his own eyes feelings of shock, disappointment, and even embarrassment. He had no idea." Phil told The Blaze that he was a broken mess 45 years ago and that "God is continuing to restore me. He has brought me to my long-lost daughter, and I love her."

Real Estate: Phil and his wife are multi-millionaires but still reportedly live in the same double-wide mobile home in Louisiana that they've occupied for their entire marriage. 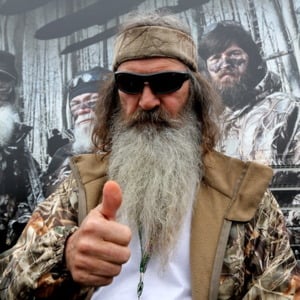