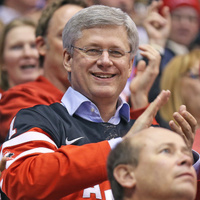 Stephen Harper net worth: Stephen Harper is a Canadian politician who has a net worth of $7 million. Stephen Harper has became famous through his years in politics, as the MP of Calgary, the head of the Canadian Alliance and helped to form the Conservative Party of Canada. Stephen Joseph Harper was born in Toronto, Ontario, Canada in April 1959. Harper is the former Prime Minister of Canada and also the former Leader of the Conservative Party. He earned a master's degree in economics in 1993. His political career started in high school as he was a part of the Young Liberals Club. He switched from liberal to conservative after disagreeing with Pierre Trudeau's National Energy Program. He has been a Member of Parliament for Calgary Southwest in Alberta since 2002. He was the MP for Calgary West from 1993 to 1997. Harper was one of the founding members of the Reform Party. He helped the Conservative Party form in 2003 as a merger of the Canadian Alliance and the Progressive Conservative Party. He has made visits to China, Australia, and Afghanistan. He received the Woodrow Wilson Award in 2006 for his public serve in Calgary. He was named by Time magazine as Canada's Newsmaker of the Year in 2006. He received the World Statesman of the Year award in 2012. He is married to Laureen Teskey and they have two children, Benjamin and Rachel.