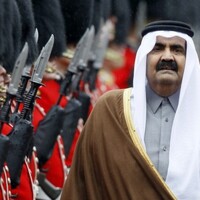 Sheikh of Qatar Net Worth

Sheikh of Qatar net worth and wealth: Sheikh Tamim bin Hamad bin Khalifa Al Thani is the Emir of the State of Qatar who has a net worth of $2 billion dollars. The Sheikh of Qatar was born in Doha, Qatar in June 1980. He became the Emir of Qatar in 2013, taking over for his father Hamad bin Khalifa Al Thani, and becoming the world's youngest reigning monarch. He has served in various government posts in Qatar as well as working to promote sporting events in the country. He graduated the Royal Military Academy Sandhurst in 1998. He became the Second Lieutenant in the Qatar Armed Forces. His elder brother Sheikh Jasim renounced the title and Tamim became the heir apparent. He has promoted ties with Saudi Arabia and supported Libyan rebels. He was appointed deputy commander-in-chief of Qatar's armed forces in 2009. He has been instrumental in helping Qatar be awarded the 2022 FIFA World Cup and the 2014 FINA Swimming World Championships. He is the National Olympic Committee chairman as well as a member of the International Olympic Committee. He heads the Qatar Investment Authority board of investors, which owns stakes in Harrods, Barclays Bank, and Sainsbury's. Sheikh Tamim has two wives and six children.