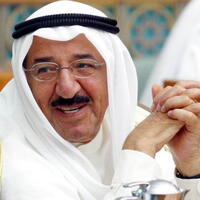 Sheikh of Kuwait Net Worth

Sheikh of Kuwait net worth: Sabah IV Al-Ahmad Al-Jaber Al-Sabah was the Emir of Kuwait. He had a net worth of $600 million at the time of his death. Sabah was also the Commander of the Military of Kuwait. The Sheikh was the head of the Sabah monarchy. He died on September 29, 2020 at the age of 91. He suffered from a stroke in 2019 that made him largely debilitated for the last year of his life. He was succeeded by his half-brother, Crown Prince Sheikh Nawaf al-Ahman al-Jaber al-Sabah.

He was born in Kuwait City, Sheikhdom of Kuwait in June 1929. At the time he was born Kuwait had not yet even discovered oil. Today the tiny country (smaller than New Jersey) produces 6% of the world's oil. He started serving in local government in 1954. Sabah served as the Foreign Minister of Kuwait from 1963 to 2003. He was tasked with restoring Kuwait's international relations after the Gulf War. He then served as the Prime Minister of Kuwait from 2003 to 2006. The emir Sheikh Jaber passed away in January 2006 making Sheikh Saad the new emir. Due to health problems Saad was unable to continue and abdicated later that month. Sheikh Sabah was chosen as the new Emir of Kuwait. In 2008 he dissolved the National Assembly of Kuwait. The Sheikh increased his annual stipend from the equivalent of $25 million to $188 million. His wife and cousin passed away in 1990. He has had four children, but two have passed away.