What is Sheikh Mohammed bin Rashid al Maktoum's Net Worth?

Sheikh Mohammed bin Rashid al Maktoum is an Emirati politician and businessman who has a net worth of $14 billion. He serves as the Vice President and Prime Minister of the United Arab Emirates, as well as the ruler of the Emirate of Dubai. Sheikh Mohammed is the owner of 99.67% of Dubai Holding and the guy responsible for those really cool man-made palm islands in the Persian Gulf.

Sheikh Mohammed bin Rashid al Maktoum was born on July 15, 1949, in Dubai. At the time of his birth, the United Arab Emirates had not been formed yet. He is a member of the Al Maktoum family, Dubai's rulers, who are also descendants of the House of Al-Falasi. His maternal grandfather is the former ruler of Abu Dhabi. Sheikh Mohammed is the third son of Sheikh Rashid bin Saeed Al Maktoum (out of a total of four sons) and Sheikha Latifa bint Hamdan Al Nahyan.

Sheikh Mohammed was educated in Dubai until 1966, when he and his cousin moved to the United Kingdom to attend the Bell Educational Trust's English Language School. He then studied and received military training at the Mons Officer Cadet School in Aldershot (now a part of Sandhurst).

After returning to Dubai, Sheikh Mohammed's father, who was the ruler of Dubai at the time, appointed him as the head of the Dubai Police Force and the Dubai Defence Force (which is now part of the Union Defence Force). Sheikh Mohammed was present at the momentous occasion in January 1968, when Sheikh Rashid of Dubai and Sheikh Zayed of Abu Dhabi first met to agree to the formation of a union between the emirates. Subsequently, the new nation the United Arab Emirates was founded on December 2, 1971, and Sheikh Mohammed became the nation's first Minister of Defence. In January 1995, Sheikh Mohammed was appointed the Crown Prince of Dubai by his older brother, Maktoum bin Rashid Al Maktoum, who served as Dubai's ruler at the time.

Upon his brother's death, Sheikh Mohammed became the Ruler of Dubai on January 4, 2006. The following day, he was named as the new Vice President of the United Arab Emirates by the nation's governing body, the Federal National Council. Then, on February 11, 2006, the Council approved him as the nation's Prime Minister (he had been nominated by President Khalifa bin Zayed Al Nahyan).

In addition to his career in politics, Sheikh Mohammed is an astute businessman responsible for the creation and growth of numerous economic assets in Dubai. Many of these businesses and assets are held under his two companies, Dubai World and Dubai Holding.

Dubai World launched in July 2006 as a holding company. It consolidated assets such as logistics company DP World and property developer Nakheel Properties. It has since expanded, and has investments around the world in places like the United States, the United Kingdom, and South Africa. Dubai Holding is the Sheikh's other company, and is has four main operating units: Jumeirah Group, TECOM Investments, Dubai Properties Group, and Emirates International Telecommunications. It mainly focuses on developing and managing hospitality ventures, business parks, real estate, and telecommunications.

Additionally, Sheikh Mohammed has also proven his business acumen in the realm of travel and airlines. He is the figure behind the launch of Emirates Airline, which is based in Garhoud, Dubai. The airline is a subsidiary of The Emirates Group, which is owned by the Government of Dubai. It is the world's fourth largest airline, and the largest airline in the Middle East. Additionally, Sheikh Mohammed also pushed for the establishment of the low-cost carrier FlyDubai, which is also government-owned. 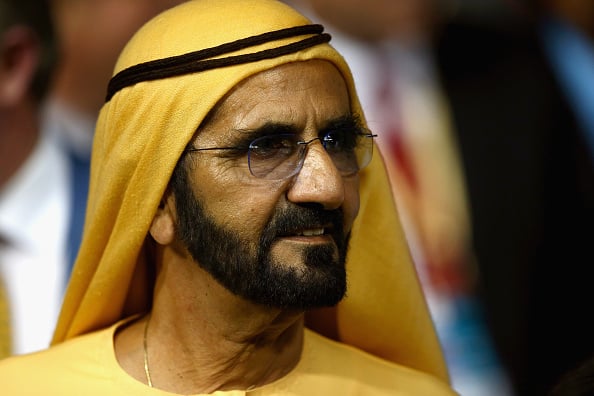 Other notable developments spearheaded by Sheikh Mohammed include the iconic Dubai hotel the Burj Al Arab. It is managed by Jumeirah, Sheikh Mohammed's hotel management company that he launched in 1997, which is now part of Dubai Holding. Another iconic property development project the Sheikh is responsible for is the Palm Islands project, a series of manmade archipelagos extending into the Persian Gulf. He also is behind the Burj Khalifa, the world's tallest building, which opened in January 2010. Part of the same development as the Burj Khalifa is The Dubai Mall, which is the world's largest shopping mall by total area.

Philanthropic Work and Other Activities

Sheikh Mohammed likes to go all-out in his personal life. He has fathered 19 children. His 1979 wedding to his first wife hold the Guinness World Record for "Most Expensive Wedding"— $100 million (in today's dollars) was spent on a month-long celebration in Dubai that culminated in a wedding for 20,000 guests in a stadium built specifically for the occasion. His second official wife was Princess Haya bint Hussein of Jordan; they married in 2004 and got divorced in 2019). Additionally, Sheikh Mohammed has had several "unofficial" wives. Princess Haya departed Dubai along with her two children in June 2019, and filed for protection and sold custody of the children in court. 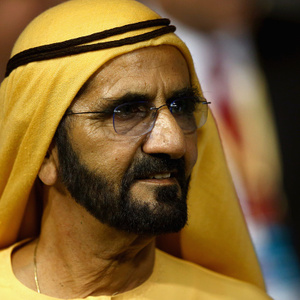