Queen Sofía of Spain Net Worth

How much is Queen Sofía of Spain Worth?

Queen Sofía of Spain net worth: Queen Sofia of Spain is the current wife of Juan Carlos I of Spain and has a net worth of $50 million dollars. Born in Psychiko, Athens, Greece on November 2, 1938, Sofia's full name is Sophia Margarita Victoria Frederika. She is a member of the House of Schleswig-Holstein-Sonderburg-Glucksburg by birth and the House of Bourbon by marriage. She is the daughter of Paul of Greece and Frederika of Hanover and was anointed on November 27, 1975. Her tenure lasted from November 22, 1975 to June 19, 2014. She attended El Nasr Girls' College as well as Schloss Salem boarding school, Fitzwilliam College, Cambridge and the University of Cambridge. in 1960 she competed on the Greek sailing team and won a gold medal in the Summer Olympics. She is a former practicer of Greek Orthodoxy and currently follows Roman Catholicism. She and Juan Carlos currently have three children together by the names of Infanta Elena, Duchess of Lugo; Infanta Cristina, Duchess of Palma de Mallorca; and Felipe VI of Spain. They also have eight grandchildren. She is currently executive president of the Queen Sofia Foundation as well as honorary president of the Royal Board on Education and Care of Handicapped Persons of Spain along with the Spanish Foundation for Aid for Drug Addicts. She has several honorary doctorates from Universities including Cambridge, Oxford, Georgetown, Rosario, Valladolid, Evora, St. Mary's University in Texas, and New York. She is widely regarded for her sense of fashion and received the privilege of wearing white in front of the pope. 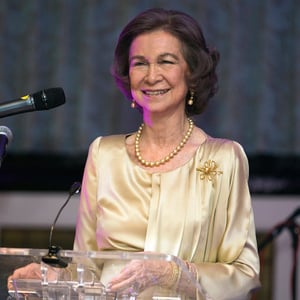