Sheikh Khalifa Bin Zayed Al Nahyan Net Worth: Sheikh Khalifa Bin Zayed Al Nahyan is the President of the United Arab Emirates and Ruler of Abu Dhabi who has a net worth of $18 billion dollars. Born January 25, 1948 in Al Ain town, State of Abu-Dhabi, Trucial States, and upon his father's death, he succeeded to the position of Emir of Abu Dhabi, thereby becoming the President of the UAE the next day, November 3, 2004.

As the former Crown Prince, he had effectively been acting as president earlier (since the late '90s) as his father was in ill health. Khalifa is also chairman of Abu Dhabi Investment Authority (ADIA). On December 1, 2005, Sheikh Khalifa announced that half of the members of the Federal National Council, the closest body the country has to a parliament, would be indirectly elected. However, the other half of the council's members would still need to be appointed by the leaders of the emirates. Early in his term he authorized a 100% salary increase for employees of the state. Sheikh Khalifa is known for his interest in sports traditional to UAE, chiefly horse and camel racing. He is generally regarded as a pro-Western modernizer. In 2011, Sheikh Khalifa sent in the UAE's Air Force and Navy to support the anti-Gaddafi forces against Muammar Gaddafi alongside NATO, Qatar, Sweden and Jordan. In January of 2014, Sheikh Khalifa suffered a stroke and was reported to have undergone an operation, but was said to be in stable condition. Further, on the philanthropic side of things, Sheikh Khalifa founded the Khalifa Award for Education, the UAE Pakistan Assistance Program and the Khalifa bin Zayed Al Nahyan Specialty Institute for Cancer Diagnosis and the Ahmed bin Zayed Al Nahyan Pancreatic Cancer Center, funded by the center's largest grant in the history of its existence. 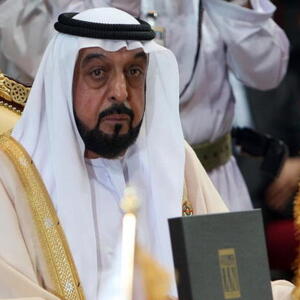