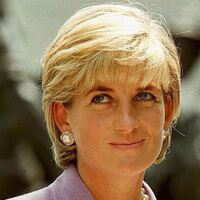 What was Princess Diana's Net Worth?

Princess Diana was a British princess and philanthropist who had a net worth of $25 million at the time of her death at the age of 36. Diana Spencer's (a.k.a. Princess Diana) "fairytale" wedding to Prince Charles of England made her popular with people the world over. Her gentle beauty made her a favorite subject for photographers and news crews. Diana's humanitarian work and her devotion to her children gave the royal family a more human and accessible face, qualities that it had often lacked. Her divorce from Prince Charles in 1996 after 15 years of marriage was met with dismay by many people. Her death in a car accident on August 31, 1997, after she and her companion, Dodi Fayed, were pursued by paparazzi, caused international mourning. Diana was known as Lady Diana Spencer after her father became the 8th Earl Spencer in 1975, Her Royal Highness The Princess of Wales after she married Prince Charles in 1981, and Diana, Princess of Wales after her divorce was finalized in 1996.

Diana was included on "Time" magazine's 1999 list of the "100 Most Important People of the 20th Century," and the publication named her "Woman of the Year" in 1987. She was ranked #3 in a BBC poll of the "100 Greatest Britons" (2002) and #15 in a "BBC History" poll of "100 Women Who Changed the World" (2018). In 1999, the Diana Award was launched in honor of the "People's Princess," and it was given to "outstanding young people selflessly creating and sustaining positive social change." Diana was a patron of charities such as the Landmine Survivors Network, National Children's Orchestra, Royal School for the Blind, British Red Cross Youth, and Malcolm Sargent Cancer Fund for Children, and in 1987, she was given the City of London's highest honour, the Freedom of the City of London.

Princess Diana was born Diana Frances Spencer on July 1, 1961, in Park House, Sandringham England. She was a member of the important British aristocratic family the Spencers, who had been  closely tied to the royal family for generations. Diana had aristocratic bloodlines from birth. Her father was John Spencer, Viscount Althorp, and her mother was the Honourable Frances Roche. She earned the title of Lady Diana in 1975 when her father assumed the title of Earl Spencer. Diana's parents welcomed five children together, but sadly, her older brother John died in infancy before Diana was born. She had two older sisters, Sarah and Jane, and her younger brother, Charles, became the 9th Earl Spencer after their father's death in 1992. Diana grew up on the Sandringham estate in a home known as Park House, which was owned by Queen Elizabeth II. Diana called the queen "Aunt Lilibet" and often played with Prince Edward and Prince Andrew when the royal family visited Sandringham House.

When Diana was 7 years old, her parents divorced, and her mother married Peter Shand Kydd in 1969. Diana and her younger brother lived with Lady Althorp in 1967 after her parents separated, but later that year Lord Althorp refused to let his estranged wife take them back to London after the Christmas holidays. He later won custody of both children, and he married Raine, Countess of Dartmouth, in 1976. Diana did not get along with her stepmother, who she referred to as a "bully," and she reportedly once pushed the Countess down the stairs. After being homeschooled, Diana attended Silfield Private School, Riddlesworth Hall School, and West Heath Girls' School. During her youth, she played piano, studied tap and ballet, and participated in swimming and diving. Diana spent a term at the Swiss finishing school Institut Alpin Videmanette, then she returned to London and worked as a dance instructor until a skiing accident put her out of commission for three months. She later worked as a playgroup pre-school assistant, a nanny, and a nursery teacher's assistant. When Diana was 18, her mother bought her a flat in Earl's Court for her birthday.

Diana first met Prince Charles in 1977 when she was 16 years old. Charles was 29 and dating Diana's sister Sarah at the time. In 1980, Charles took an interest in Diana when they were guests at a mutual friend's home in Sussex. Charles later invited Diana on a sailing weekend aboard his family's yacht Britannia and to meet his family at Balmoral Castle, and he proposed at Windsor Castle on February 6, 1981. Charles and Diana married at St Paul's Cathedral on July 29, 1981, when Diana was 20 years old. The televised wedding was watched by 750 million people.

When Diana married Charles, she became the Princess of Wales, making her the third highest-ranked woman in the British order of precedence. The royal couple honeymooned in various locations around the world, including Egypt, Tunisia, and Greece.

Diana announced her first pregnancy in November 1981, and Prince William Arthur Philip Louis was born on June 21, 1982. Two years later, Diana gave birth to her second son with Charles, Prince Henry Charles Albert David, on September 15, 1984. As Princess of Wales, Diana became heavily involved in a variety of charities, most notably working with leprosy and AIDS organizations. Soon, she was involved with more than 100 different charities. By the early '90s, Diana's relationship with Charles had started to suffer. 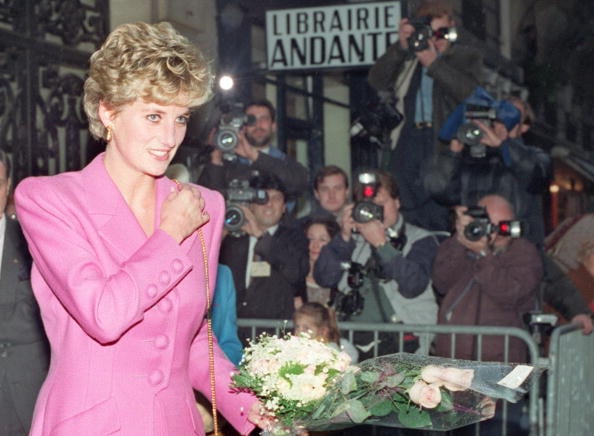 Charles and Diana had a notoriously rocky relationship with rumors of fights and infidelity. In 1986, Charles entered into a relationship with his ex-girlfriend, Camilla Parker Bowles, and Diana became involved with Major James Hewitt, who formerly worked as a riding instructor for the family.

In late 1995, the Queen advised Charles and Diana to divorce, and the divorce was finalized on August 28, 1996. Diana received a $24 million divorce settlement from Charles. By comparison, Sarah Ferguson, who was Diana's sister-in-law from 1986 to 1996, received $900,000 to be used towards buying a house and $600,000 in cash when she divorced Prince Andrew. Following the divorce, Diana continued to live at Kensington Palace. She dated surgeon Hasnat Khan for nearly two years. In July 1997, Diana began dating film producer Dodi Fayed, the son of billionaire businessman Mohamed Al Fayed.

On August 31, 1997, just over a year after her divorce, Lady Diana was killed in a car accident in Paris' Pont de l'Alma tunnel. Fayed and the car's driver, Henri Paul, were pronounced dead at the scene, and Diana died at Pitié-Salpêtrière Hospital a few hours after the accident. A French investigation concluded that Paul was intoxicated at the time of the crash, while a British inquest found that he was driving negligently with paparazzi in hot pursuit of the car.

Diana was laid to rest on September 6th, 1997, and Elton John famously performed "Candle in the Wind" as a memorial to the late Princess. The funeral at Westminster Abbey was televised, and more than 2 billion mourners watched the broadcast. Diana was buried on an island within Althorp Park, where the Spencer family has lived for centuries.

After Diana's death, several memorials were dedicated to her, such as The Diana, Princess of Wales Memorial Gardens (Regent Centre Gardens Kirkintilloch), The Diana, Princess of Wales Memorial Fountain (Hyde Park, London), and The Princess Diana Memorial Austria (garden of Schloss Cobenzl, Vienna), and her sons commissioned a statue of their beloved mother to be erected in Kensington Palace's Sunken Garden. In 2019, the Place de l'Alma, which is above the Pont de l'Alma tunnel, was renamed Place Diana princesse de Galles. 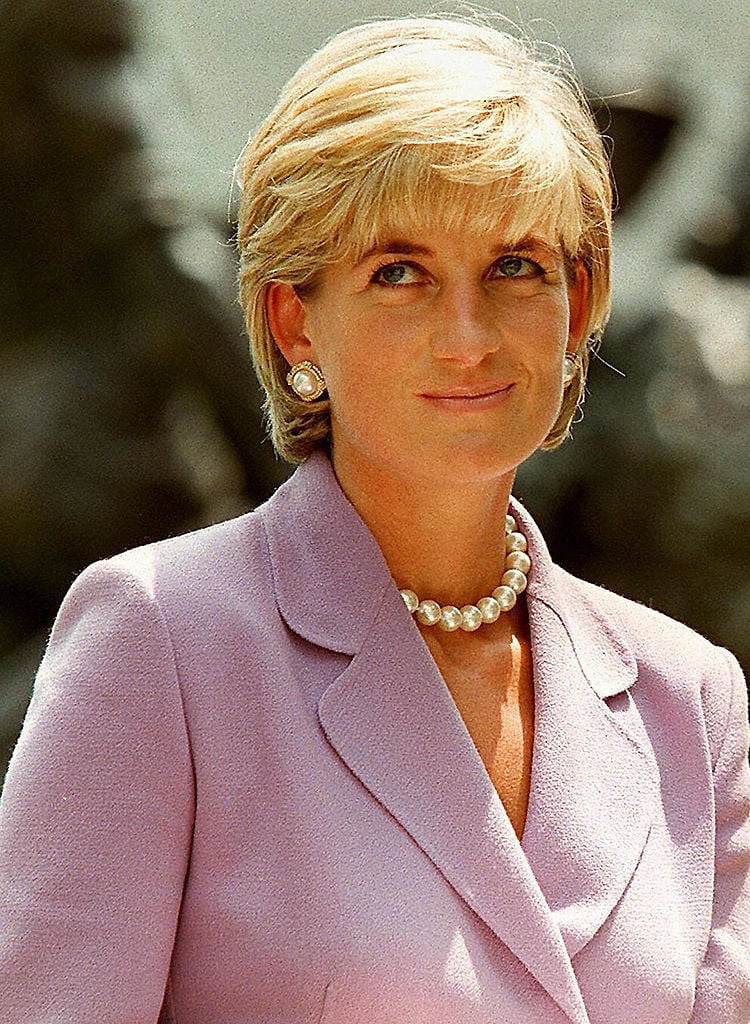 (JAMAL A. WILSON/AFP via Getty Images)


Upon her death, Diana's roughly $24 million worth of assets were put into a trust for her two sole heirs, Prince William and Prince Harry. The trust dictated that each son would inherit their share of the trust upon turning 30. By the time both sons were 30, they ended up inheriting $40 million apiece.