in Richest Politicians › Royals
Musa I of Mali Net Worth:
$400 Billion

Mansa Musa was the tenth Mansa, or conqueror, of the Mali Empire who reigned from 1312 to 1337. He is widely considered to be one of the wealthiest historical figures due in part to the amount of gold that Mali produced during his reign. At the peak of the Mali Empire, Mansa Musa had a net worth that was worth the same as the modern equivalent of $400 billion.

Mansa Musa was born in 1280 and passed away in 1337 (or possibly 1332). He was the 10th Mansa which means "King of Kings" or Emperor. When Musa rose to power the Malian Empire consisted of territory that belonged formerly to the Ghana Empire. Mansa Musa held titles such as Lord of the Mines of Wangara, Emir of Melle, and Conqueror or Ghanata. He was appointed deputy of Abubakari II who never returned from an expedition. Mansa Musa was a devout Muslim who went on a pilgrimage to Mecca in 1324. He took 60,000 men and 12,000 slaves who each carried four pounds of gold bars. Musa was responsible vast building projects including mosques and madrasas in Gao and Timbuktu. The most famous piece of construction during his reign was the Sankore Madrasah.

The Richest Human Being Of All Time

After adjusting for inflation, Mansa Musa is generally considered to be the richest human being who ever lived. His inflation-adjusted net worth of $400 billion tops John D. Rockefeller's inflation adjusted $340 billion and Andrew Carnegie's $310 billion.

Lineage and Pilgrimage: Much of what is known about Mansa Musa's history and lineage is taken from the writings of Arab scholars like Al-Umari, Ibn Battuta, and Ibn Khaldun. Mansa Musa's grandfather was Abu-Bakr Keita, who was the nephew of Sundiata Keita. Keita is considered to be the founder of the Mailian Empire. Neither Mansa Musa's grandfather or father, Faga Laye, ascended to the throne nor played a significant role in the history of Mali.

The general practice to become a king in Mali involved the current king appointing a deputy who would lead in his place while the king made a pilgrimage to Mecca or went on some other expedition. Musa was appointed the deputy of Abubakari Keita II, the king before him, while he went on an expedition to explore the Atlantic Ocean. However, he reportedly never returned and Musa assumed the throne.

Musa made his pilgrimage to Mecca between 1324 and 1325, the journey spanning 2,700 miles. His procession included 60,000 men and slaves who carried gold, bags, and dressed in silk. He also traveled with a large number of animals , including many horses for the men and 80 camels who transported hundreds of pounds of gold dust. Along his way, Musa gave gold to the many impoverished citizens he met and traded gold in various cities, in addition to building mosques along the route. Musa generosity with his gold was actually counterproductive, as the massive influx of gold in cities like Cairo and Medina caused a significant devaluation of the metal and Musa tried to rectify the problem on his journey home by borrowing gold from money lenders in these cities at high interest rates. This time in history is significant as it marks the only time the entire gold industry and pricing was controlled by one man. 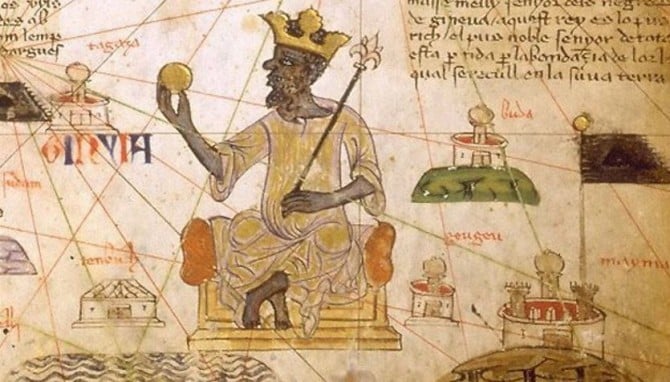 Reign: Musa's incredible and impressive wealth, particularly in gold, was widely known throughout the region, in large part because it was so prominently on display during the pilgrimage to Mecca. In Mali, he sponsored a massive construction and building program, raising many mosques and madrasas, including Sankore Mandrasah (the University of Sankore), during his reign. He also encouraged urban living, as more people moved to city centers during his time and he is credited with being an integral part of the formation of urban civilization.

Musa also expanded his empire, making Timbuktu and Goa part of it as he traveled through these cities during his pilgrimage. He built his grand palace in Timbuktu, the Djinguereber Mosque, during this time with the help of Spanish and Egyptian architects. Timbuktu became a key center of trade and culture in Musa's empire, in addition to a center for Islamic scholarship. He was also devoted to education and during his reign the University of Sankore developed one of the largest libraries in the world with roughly 1,000,000 manuscripts, rivaling the Library of Alexandria. The city developed such a prominent reputation that trades in southern European cities like Venice and Genoa added Timbuktu to their trading routes.

Death: Musa's exact date of death is not known precisely as it is a hotly debated topic among scholars. Given that Musa is recorded to have reigned for 25 years and compared to the reigns of his successors, some put his date of death in 1337. Others say he died much earlier and argue that records indicate he abdicated the throne to his son and died shortly after returning from Mecca in 1325. Yet another report indicates that Musa was alive during the construction of the city of Tlemcen in Algeria, which took place in 1337. 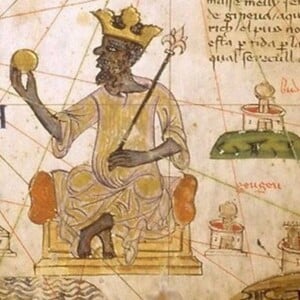 Musa I of Mali