King Mswati III Swaziland net worth: Mswati III is the current King of Swaziland who has a net worth of $100 million dollars. Prince Makhosetive Diamini was born in Manzini, Swaziland in April 1968. He is also the head of the Swazi Royal Family. Mswati's father was King Sobhuza II. He attended Sherborne School from 1983 to 1986.

His father had over 125 wives, but Mswati was the only child of his mother. He was introduced as Crown Prince in 1983 and became king in 1986 at 18 years old. This made him the youngest reigning monarch at that time. He made a new constitution in 2004 that promoted freedom of speech and assembly. In 2001 he invoked a chastity ride, which meant that all Swazi maidens should not have sexual relations for five years to fight against AIDS and HIV. King Mswati has 15 wives and 24 children. Parliament allocated $61 million for his household budget in 2014. This drew criticism since many Swazis live on little more than $1 a day. He has purchased a $500,000 DaimlerChrysler Maybach 62 automobile. The King rules with his mother Ntombi as an absolute monarchy. 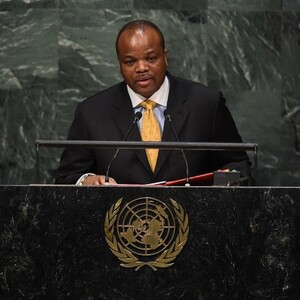