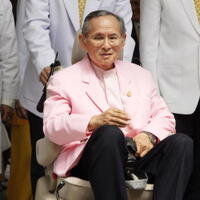 King of Thailand Net Worth

in Richest Politicians › Royals
King of Thailand Net Worth:
$30 Billion

What was King Bhumibol Adulyadej's Net Worth?

Bhumibol Adulyadej, also known as the former King of Thailand and Rama IX, was the monarch of Thailand from 1946 to 2016. At the time of his death, he had a net worth of $30 billion. That likely made him the richest royal person on the planet in terms of physical real assets controlled by one person, as opposed to intrinsic assets like how Queen Elizabeth technically owns all British land around the world.

During his life, Adulyadej was the longest-reigning monarch in Thailand's history and the longest-serving current monarch/head of state in the world. He reigned 70 consecutive years after being crowned on June 9, 1946. He is the ninth consecutive monarch in the Chakri Dynasty, which dates back to 1782. As a ruler, Bhumibol earned praise for a social-economic theory of self-sufficiency, and he gave numerous donations to various projects in Thailand, in areas including agriculture, environment, public health, occupational promotion, water resources, communications, and public welfare. The King of Thailand is respected and revered on nearly God-like levels by the Thai people, and he is legally considered "inviolable" (i.e., an offense against the dignity of the monarch may be punished).

Bhumibol's $30 billion net worth came from a wide variety of lucrative business interests. First, through the Crown Property Bureau (CPB). Adulyadej owned 3300 acres of real estate in central Bangkok as well as 13,200 acres of country land and property. Next, the King owned a 32% stake in Siam Cement; this stake alone is worth an estimated $13 billion. He also owned 23% of Siam Commercial Bank (the largest bank in Thailand) as well as stakes in an insurance company, the Shin Corporation – a conglomerate of telecommunication, media, aviation, advertising and finance companies.

Table of Contents
💰 Compare King of Thailand's Net Worth

Bhumibol Adulyadej was born on December 5, 1927, in Cambridge, Massachusetts, due to his father's enrollment in Harvard University's public health program. "Baby Songkla" is the name on his birth certificate, but after his parents, Prince Mahidol Adulyadej (the Prince of Songkla) and Mom Sangwan (who was later known as Princess Srinagarindra), consulted Adulyadej's uncle, King Rama VII, the family decided on Bhumibol Adulyadej, which means "Strength of the Land, Incomparable Power" in Thai. Bhumibol grew up in Thailand with older sister Princess Galyani Vadhana and older brother Prince Ananda Mahidol, and their father passed away from kidney failure in 1929.

Adulyadej briefly studied at Bangkok's Mater Dei school, but his mother moved the family to Switzerland in 1933, and there he attended the École nouvelle de la Suisse romande. When King Rama VII abdicated the throne, Ananda Mahidol became king at the age of 9. The family kept living in Switzerland and let a regency council handle Ananda's royal duties. Bhumibol became interested in photography and jazz music during his youth and began playing saxophone in the early 1940s. He graduated from the Gymnase Classique Cantonal de Lausanne with a baccalauréat des lettres (majoring in French literature, Greek, and Latin), and he studied science at the University of Lausanne until the family moved back to Thailand after World War II.

After King Ananda Mahidol died of a gunshot wound (under mysterious circumstances) on June 9, 1946, Adulyadej succeeded him, but before he ascended the throne, he resumed his studies in Switzerland, changing his focus from science to law and political science. Bhumibol's uncle Rangsit, the Prince of Chainat, acted as his regent. Adulyadej's coronation was postponed after he was injured in a car accident in October 1948, suffering back injuries, facial paralysis, and the loss of sight in his right eye. He was coronated on May 5, 1950, and promised to "reign with righteousness for the benefit and happiness of the Siamese people." Bhumibol returned to Switzerland to finish his studies, then moved back to Thailand in 1951. He didn't have much power during the first years of his reign due to the government of Plaek Phibunsongkhram, a military dictator, but in 1957, Phibunsongkhram was overthrown by Field Marshal Sarit Thanarat and the Royal Thai Army. Adulyadej imposed martial law and appointed Sarit Thanarat "Military Defender of the Capital." 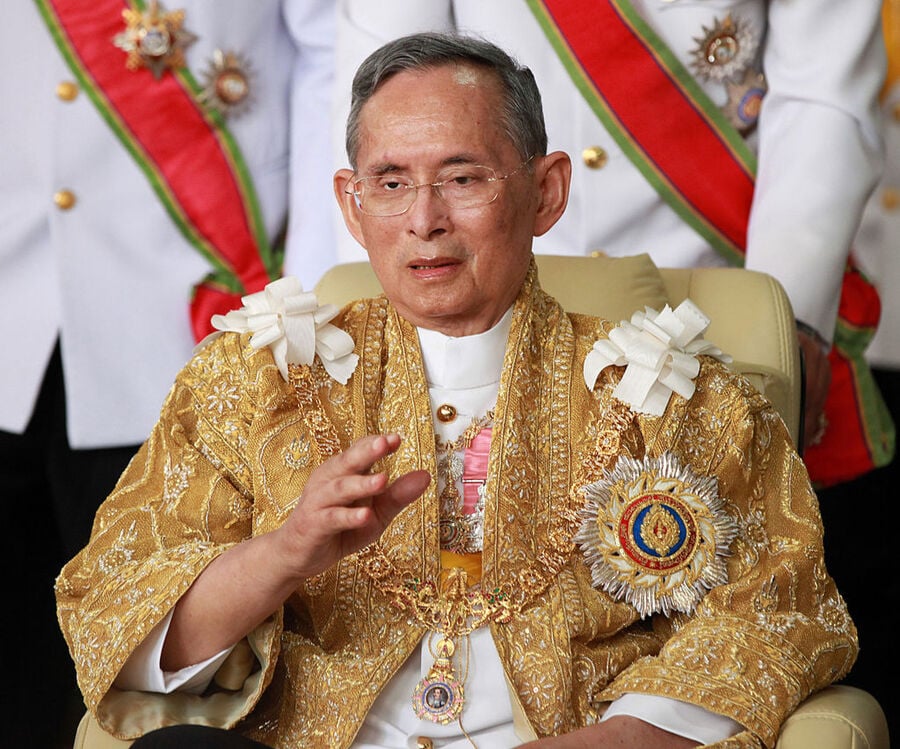 After Thanarat's death in 1963, General Thanom Kittikachorn led Thailand's military dictatorship, but he was challenged by the Thai popular uprising in 1973. After police killed several students and riots ensued, Bhumibol announced Kittikachorn's resignation, and the general left Thailand. When Adulyadej invited Kittikachorn back into Thailand, students and legal groups were outraged and began holding protests, leading to the Thammasat University massacre on October 6, 1976. Police and paramilitary opened fire on campus, and Border Patrol Police commandos later stormed the university grounds, followed by police and right-wing paramilitaries. The official death count was 46 (and 167 wounded), but unofficial reports estimated that at least 100 demonstrators lost their lives that day. In 1992, Bhumibol was instrumental in transitioning Thailand to a democratic system after intervening in a conflict between General Suchinda Kraprayoon (the leader of a coup group) and Chamlong Srimuang (a retired Major General who led the pro-democracy movement). Kraprayoon soon resigned, and a general election was later held.

Bhumibol married Mom Rajawongse Sirikit Kitiyakara, the daughter of Thai ambassador Nakkhatra Mangala, on April 28, 1950, and they had four children together: Princess Ubolratana Rajakanya (born in April 1951), King Maha Vajiralongkorn (born in July 1952), HRH Princess Maha Chakri Sirindhorn (born in April 1955), and HRH Princess Chulabhorn Walailak (born in July 1957). Besides being King of Thailand, Adulyadej was also an author, painter, photographer, musician, and translator. He published the books "Phra Mahachanok" and "The Story of Thong Daeng," and he played saxophone, trumpet, piano, guitar, and clarinet. Bhumibol began composing his own music by his 18th birthday, and he performed with artists such as Benny Goodman, Lionel Hampton, Benny Carter, and Stan Getz. He wrote nearly 50 compositions during his life, including "Candlelight Blues," "Falling Rain," and Love at Sundown," and the Yale School of Music honored him with a Sanford Medal in 2000. Adulyadej also enjoyed sailing as well as designing and building boats, and he competed in the Fourth Southeast Asian Peninsular Games in 1967, winning a gold medal for sailing.

Adulyadej was diagnosed with lumbar spinal stenosis in 1995, and in 2006, he underwent a microsurgical decompression. In 2007, he ended up in the hospital due to a blood shortage to his brain; he was also treated for heart problems during his three-week stay. In 2009, Bhumibol was admitted to the hospital with pneumonia and the flu, and in 2011, WikiLeaks revealed that he suffered from depression and Parkinson's disease. In 2012, Adulyadej was treated for diverticulitis and minute subdural bleeding in his brain. On October 1, 2016, the palace announced that the King of Thailand was suffering from a blood infection, inflammation on his lung, and kidney failure. He was placed on a ventilator the following week, and he passed away at Bangkok's Siriraj Hospital on October 13, 2016, at the age of 88. The next day, Bhumibol's body was taken to the Grand Palace for a bathing rite, and a five-day cremation ceremony took place at the end of the month. His ashes were enshrined at the Wat Bowonniwet Vihara Royal Temple, the Chakri Maha Phasat Throne Hall, and the Royal Cemetery at Wat Ratchabophit. Adulyadej was succeeded by his son, Crown Prince Maha Vajiralongkorn.