Juan Carlos I of Spain Net Worth

in Richest Politicians › Royals
Juan Carlos I of Spain Net Worth:
$50 Million

Juan Carlos net worth: Juan Carlos is a member of the Spanish royal family and politician who has a net worth of $50 million. He is best known for being the King of Spain from November 1975 to June 2014. He abdicated the throne in 2014 amid a financial scandal that ultimately caused him to exile himself from Spain in 2020.

Early Life and Rise: Juan Carlos was born in Rome, Italy in January 1938. Juan Carlos is a member of the House of Bourbon and was born to his father Infante Juan, Count of Barcelona and his mother Princess Maria de las Mercedes of Bourbon-Two Sicilies.

Spain did not have a king for nearly 40 years after the Bourbon family was kicked out in 1931.

Juan Carlos was chosen by dictator Francisco Franco to take over in 1969. When Franco passed away in 1975 Juan Carlos became King.

Juan Carlos helped dismantle the Francoist regime and started a transition towards democracy. A constitutional monarchy was established with the Spanish Constitution in 1978. He helped prevent a significant military coup in 1981. Juan Carlos also served as president of the Ibero-American States Organization which consisted over more than 700 million people in 24 member nations. Juan married Princess Sofia of Greece and Demark in 1962 and the couple has three children and eight grandchildren.

Abdication: Carlos abdicated the throne to his son Felipe VI in 2014. He made the decision to give up the thrown in the wake of a financial scandal involving his daughter Infanta Cristina and her jailed husband Inaki Urdangari. Carlos never fully recovered from a controversial tax-payer-funded elephant hunting trip in Botswana that same year. The trip was supposed to be a secret but was made public after he broke his hip during the vacation. At the time, Spain was in the midst of a severe financial crisis.

After abdicating, Juan Carlos and Sofia retained their titles and styles from their reign.

Personal Wealth: Upon his ascension to the throne in the late 1970s, Juan Carlos' personal net worth was essentially zero. That lack of wealth was quite unusual for a reigning King of a European country. Over time he amassed substantial personal assets as a deal maker and ambassador for Spain, often stepping in to make introductions and grease wheels. This wealth was above and beyond the $11 million annual budget that was covered by Spanish tax payers to maintain his lifestyle.

The Spanish royal family's combined net worth has been estimated to be as much as $2.3 billion. The family disputes this number, saying it's inflated by the inclusion of valuable government-owned properties that the family uses.

There is no law against a Spanish king accepting gifts, but over the decades he has received cars, yachts and even an island home as gifts. It has been alleged that Juan Carlos has a collection of more than 50 cars.

Exile and Corruption Charges: In an attempt to clear the family name and steer the royal ship in a new direction, in March 2020 King Felipe cut his father's annual allowance to $228,000 and renounced all personal inheritance he could have received from his father connected to the Saudi deal.

In mid-2020, the Spanish royal family confirmed that Juan Carlos had gone into exile somewhere abroad. Former Queen Sofia stayed in Spain, while Juan Carlos' whereabouts were not immediately known. On August 3, 2020, Juan Carlos wrote a letter to his son confirming that he would make himself available to prosecutors who are investigating his financial dealings. At the time reactions were a mix between people who thought he should have stayed in Spain to face charges and others who felt his continued presence embarrassed and tarnished his son's reign.

Saudi "Donation": Just three months before his exile was confirmed, the Spanish Supreme Court announced it was investigating Juan Carlos' involvement in an $8 billion high speed rail construction contract that was awarded to a Saudi company.

Prosecutors later alleged that Juan Carlos received a $100 million "donation" from the King of Saudi Arabia that was deposited in an offshore account in 2008.

In 2012 Juan Carlos allegedly gave his former mistress Corinna Larsen a gift of $75 million funded by this offshore account. These funds were then allegedly used to purchase and then renovate two apartments at an ultra-exclusive Swiss ski resort AND to purchase a mansion in North London for $6.4 million. 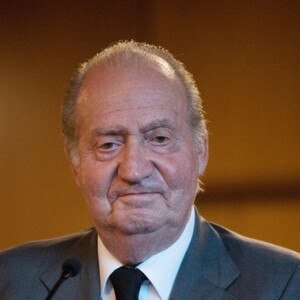 Juan Carlos I of Spain