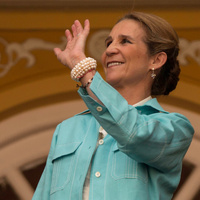 Infanta Elena Net Worth: Infanta Elena is a Spanish Duchess who has a net worth of $10 million. Infanta Elena, Duchess of Lugo was born Elena Maria Isabel Dominica de Silos in Madrid, Spain in December 1963. She is the eldest daughter to King Juan Carlos and Queen Sofia of Spain and has a younger brother King Felipe VI and a younger sister Infanta Cristina. She met her future husband Jamie de Marichalar y Saenx de Tejada while she was studying French literature in Paris. The two married in 1995 and Elena's father conferred on her the title of Duchess of Lugo for life. The couple has had two children, a daughter and a son. In 2007 the couple separated and the divorce occurred in 2009 and was registered in 2010. At that time Jaime de Marichalar was no longer an official member of the Spanish Royal Family and was not permitted to use the ducal title. Elena has participated in many official events. She has traveled to the United States, the United Kingdom, Germany, Japan, Peru, Argentina, and the Philippines while representing the Royal Family. Elena is third in the line of succession to the Spanish throne.