Infanta Cristina Net Worth: Infanta Cristina is a Spanish Duchess who has a net worth of $10 million. Infanta Cristian of Spain, Duchess of Palma de Mallorca was born in Madrid, Spain in Jun 1965. She is the youngest daughter King Juan Carlos and Queen Sofia of Spain. Cristina graduated from the Universidad Complutense de Madrid in 1989 and earned a master's degree from New York University in 1990.

She worked at the UNESCO headquarters in Paris in 1991. In 1997 Cristina married professional handball player Inaki Urdangarin and the couple has four children. She moved to Switzerland in 2013 to take a job with the Caixa Foundation. Her husband the Duke was involved in a corruption scandal in 2011 and accused of diverting public funds for his own profit. Cristina was named as a suspect nit eh case in 2013 and she could face up to 11 years in jail if she is found guilty. Cristina was a member of the Spanish Olympic sailing team in 1988 at the Seoul Games and was the standard bearer in the opening parade. As of 2014 Cristina is sixth in the line of succession to the Spanish throne. 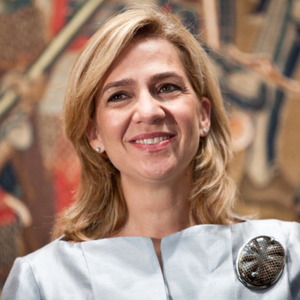