Princess Charlene of Monaco Net Worth

She represented South Africa at the 2000 Sydney Olympics, with her team finishing fifth in the 4 × 100 meter medley relay. She retired from competitive swimming in 2007. Charlene met Prince Albert at the Mare Nostrum (swimming), Monte Carlo, Monaco in June 2001. They were first seen together in 2006, and she accompanied the prince on many of his official duties since. They announced their engagement in June 2010 and were married on July 1, 2011. As Monaco's first lady, Charlene presides over the principality's National Day celebrations, the Monaco Grand Prix, the Rose Ball (Bal de la Rose-held to raise funds for the Princess Grace Foundation, and the annual Red Cross Ball. Princess Charlene is known for her elegant fashion style, patronizing designers Akris and Armani. She wore an exclusive Giorgio Armani Privé wedding dress and was spotted at the Akris show at Paris Fashion Week in October 2011. Charlene went to South Africa to attend the memorial service of Nelson Mandela on December 12, 2013. Her advisor is Princess Corinna zu Sayn-Wittgenstein. On May 30, 2014, it was announced that Princess Charlene and Prince Albert were expecting their first child by the end of 2014. It was later revealed that she was having twins and in December 2014 Princess Gabriella and Hereditary Prince Jacques were born. 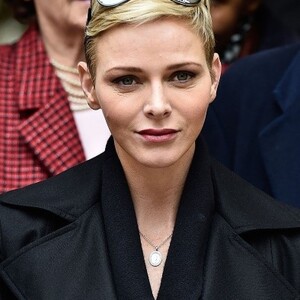