How much is Akihito Worth?

Akihito net worth: Akihito is the former reigning Emperor of Japan. He has a net worth of $40 million dollars. Akihito served as Emperor from 1989 until 2019.

Akihito was born in Tokyo Imperial Palace, Tokyo, Japan in December 1933. He is the eldest son of Emperor Showa and Empress Kojun. He and his younger brother were evacuated during the American firebombing raids in 1945. At birth Akihito was the Heir-Apparent of the Chrysanthemum Throne. His Investiture as Crown Prince was held in 1952. He formally acceded to the throne in 1990 following the death of Emperor Hirohito in 1989.

In 2003 he underwent surgery for prostate cancer. He made a historic television appearance in 2011 following the Tohoku earthquake and tsunami and the Fukushina I nuclear crisis. Akihito has expressed remorse to Asian countries including China, for their suffering under Japanese occupation. In 2005 he visited the site of a World War II battle in Saipan and offered prayers and flowers at memorials. In 2011 he suffered from pneumonia and in 2012 he underwent successful heart bypass surgery. Akihito married Michiko Shoda in 1959. The Emperor and Empress have three children. He is a published ichthyological researcher and has written papers for scholarly journals. Akihito was succeeded by his eldest son Naruhito, Crown Prince of Japan, in April 2019. 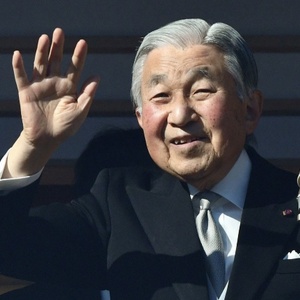