What is Tucker Carlson's net worth and salary?

Tucker Carlson is an American political commentator, author and TV personality. Tucker Carlson's net worth is $30 million. Tucker was a CNN commentator from 2000 to 2005. From 2005 to 2008 he hosted a show on MSNBC. He went to work at Fox News in 2009. He began hosting a nightly talk show called "Tucker Carlson Tonight" in 2016. Outside of television, Tucker is the co-founder of the website The Daily Caller. He is also a published author and columnist.

Tucker was born in San Francisco but was raised mostly in Southern California. His father was an LA news anchor and ambassador to the Seychelles named Richard Warner Carlson. Tucker's mother left the family when he was just six years old. When Tucker was 10, Richard married Patricia Caroline Swanson. Patricia was exceptionally wealthy thanks to her grandfather Carl A. Swanson, who founded the Swanson frozen foods empire.

He attended Trinity College in Hartford, Connecticut where he graduated with a degree in history in 1991.

His work as a journalist began in print at publications such as Policy Review and the Arkansas Democrat-Gazette. From there, he landed gigs as a columnist for periodicals like Reader's Digest and New York Magazine. He also has appeared in newspapers and magazines like Esquire, The Weekly Standard, The New Republic, The New York Times Magazine, and The Daily Beast. Carlson began his career in TV as one of the hosts of the CNN panel discussion program Crossfire. On this show, Carlson generally took up the position of the right-wing point of view.

His most notable work during this period was during a contentious interview with comedian Jon Stewart, which many analysts believe directly led to Crossfire's cancellation soon after. Since then, Carlson has found jobs on both of CNN's primary competitors, MSNBC and most recently on Fox News.

For many years Carlson was famous not only for his sometimes-idiosyncratic conservative views, but his trademark bow-tie. Wearing a bow-tie was often referred to as "the Tucker Carlson look".

In 2017, Tucker took over the slot that Bill O'Reilly left vacant after he was fired from Fox News. Within a few years "Tucker Carlson Tonight" was the highest-rated show on Fox News by significant margin. With average nightly viewership of 3.4 million, Tucker has more viewers than his CNN and MSNBC counterparts combined.

Around the time of his elevation at Fox News, Tucker signed a lucrative book deal. The deal was reported to be worth $15 million and covered several books. 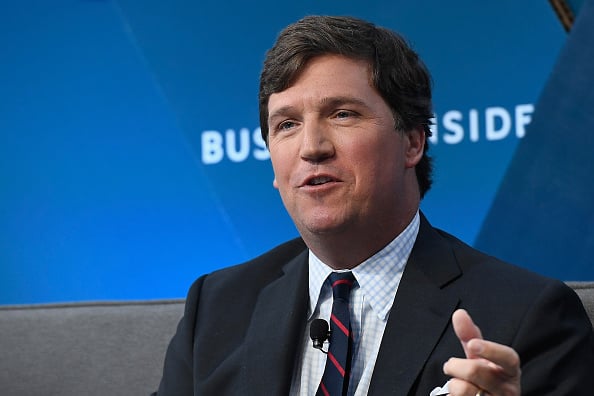 Tucker Carlson's annual salary at Fox is $6 million. While that may seem like a lot, keep in mind that the man he replaced, Bill O'Reilly, was earning $20 million a year from Fox and as of this writing Carlson is actually outperforming O'Reilly.

In 2010 Tucker and Neil Patel co-founded DailyCaller.com, a right-wing news and opinion property. They positioned it as a conservative version of The Huffington Post. In June 2020 Tucker sold his 1/3 stake to Patel for an undisclosed amount.

Tucker has been married to Susan Andrews since 1991. They met (and later married) at the chapel of St. George School, a boarding high school in Middletown, Rhode Island. They have four children.

For nearly a decade, Tucker and his brother Buckley have been embroiled in a lawsuit related to their estranged mother's estate. Their mother Lisa Vaughn was the beneficiary of an oil and gas partnership in rural areas of central California that covered a combined total of 70,000 acres of land. At one point the brothers thought the royalty rights were worth a fairly insignificant amount of money, maybe $125,000 at most. They eventually learned the rights were worth a minimum of $2.5 million. They sued their late mother's estate which expressly left each brother the nominal amount of $1. That lawsuit is reportedly still unsettled as of this writing.

In July 2017 they bought a new house again in the same neighborhood of Kent for $3.895 million. They put this home up for sale in July 2020 for $3.95 million, a slight increase. They sold the home within a month at asking. They reportedly decided to sell the home after a group of protestors came onto the driveway and even rang their doorbell.

In early-2020 Tucker paid $2.9 million for a home on Gasparilla Island in Florida.

Today the Carlsons split their time between their Florida home and a home located on his family's property in Maine.