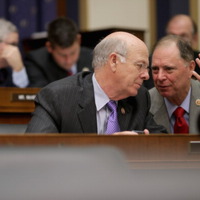 Steve Pearce Net Worth: Steve Pearce is an American politician who has a net worth of $7.5 million. Born Stevan Edward Pearce on August 24, 1947, in Lamesa, Texas, he is the U.S. Representative for New Mexico's 2nd congressional district. Once he received a Bachelor of Business Administration in economics, Pearce went on to earn Master of Business Administration from Eastern New Mexico University in Portales. Following college, he served in the Vietnam War as a C-130 pilot in the United States Air Force, and was honorably discharged from the U.S. Air Force with the rank of Captain. A member of the Republican Party, he was elected to New Mexico House of Representatives in 1996 and re-elected in 1998, each time unopposed. He also joined the ranks of the Appropriations Committee and was elected as Republican Caucus Chairman before running for the United States Senate. Serving since 2011, Pearce previously held the seat from 2003 to 2009 and was an Assistant Minority Whip. Today, he is the only Republican in the New Mexico Congressional Delegation, and the only Republican Congressman who represents a district along the Mexico-United States border.