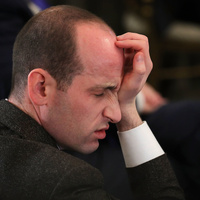 Stephen Miller net worth: Stephen Miller is an American political activist who has a net worth of $200 thousand. Stephen Miller was born in Santa Monica, California in August 1985. He is a Republican who graduated from Duke University. Miller became the White House Director of Speechwriting under President Donald Trump in January 2017. At the same time, he also became the Senior Advisor to the President along with Jared Kushner. Miller formerly served as the communications director for Senator Jeff Sessions and was a press secretary for Republican representatives John Shadegg and Michele Bachmann. Stephen Miller helped architect Trump's travel ban as well as his policy of separating migrant children from their parents and the administration's reduction of refugees accepted into the country. He has made false and unsubstantiated claims in regard to widespread electoral fraud. He had a heated debate with Jim Acosta from CNN at the White House daily briefing in 2017. According to his 2016 personal finance disclosure, Miller's net worth ranges between $60,000 and $245,000. He earned $106,000 for his work during the campaign. He earns $179,000 for his White House job.