Shepard Smith Net Worth and Salary: Shepard Smith is an American television news anchor who has a net worth of $25 million. Smith joined Fox News when the network was first created way back in 1996, and he stayed with this news channel until 2019. During this 23-year period, Shepard became one of the most recognizable faces on the channel and across all news television in general. While at Fox, he hosted "Fox Report," "Studio B," and "Shepard Smith Reporting."

His decision to leave Fox News came as something of a shock to many viewers, especially since Smith had become one of the most popular and well-known figures associated with the network. After leaving the channel, he started working for NBC and CNBC. In 2020, he started hosting another show called "The News with Shepard Smith." He now serves as chief general news anchor for CNBC.

Early Life: Shepard Smith was born on January 14th of 1964 in Holly Springs, Mississippi. Raised by a family with links to the cotton trade, Shepard attended a preparatory school as a child. After he graduated from high school, his family separated, with his mother moving away to Florida. Smith followed his mother to Florida, although he also studied journalism at the University of Mississippi. Shepard never actually completed his degree, as he dropped out in order to start working as a reporter in Florida. He was just two credits short of earning his degree.

Career: Shepard Smith began his journalism career as a correspondent for various local TV news stations. He started with an NBC affiliate in Panama City Beach, Florida, beore moving on to another NBC affiliate in Fort Myers. While working for Fox News affiliate in Miami, Smith started hosting a show called "A Current Affair."

Shepard began his journey with Fox in 1996, soon after the network was first created. By 1997, he was reporting on massive stories like the death of Princess Diana. In 1998, Smith gained notoriety after reporting on Bill Clinton's impeachment trial. During the latter part of the decade, he also covered the Columbine shootings. Over the next few years, Shepard was one of Fox's key correspondents, and he reported on stories such as the execution of Timothy McVeigh and the devastation of Hurricane Katrina.

In 2003, Smith was one of the key figures who helped Fox News gain third place amongst all cable news programs in the United States. This was in large part due to the Shepard's popularity, and a survey revealed that he was one of the most trusted news anchors in the country (tied for second place with Dan Rather and Peter Jennings).

By 2013, Shepard had taken a much more active role behind the scenes, and he was promoted to managing director of the Fox News breaking news division. He also began hosting "Shepard Smith Reporting." Smith's tenure with Fox seemed to take a negative turn after Trump's election in 2016. Not long after Trump's inauguration, Shepard made comments that seemed to deny Hillary Clinton and Obama's alleged connection to a shady deal with a Russian mining company.

Although Smith's popularity was not as high among Trump-supporting Fox viewers, he still signed a new multi-year contract in 2018. However, Shepard finally left Fox in 2019 amidst widespread criticism from Fox viewers and Trump himself. In 2020, he started working with CNBC and was given a new show called "The News with Shepard Smith." After leaving Fox, Smith also warned that authoritarian governments now have the power to silence journalists. It was widely assumed that he was referring to the Trump administration.

Outside of journalism, Shepard has made a few brief appearances in various films – usually appearing as himself in the role of a news anchor. You may have spotted him in films like "Volcano." Archival footage of Smith was also used in documentaries like "Fahrenheit 9/11" and "Bombshell."

Salary: In 2007, Shepard Smith signed a three-year contract with Fox that was worth approximatel $7.5 million per year. In 2010, he extended this contract for another three years. In 2013, Smith renewed his contract with Fox News once again and signed a multi-year deal that paid him a total annual salary of $10 million. When he departed from Fox News in 2019, he was reportedly earning a significantly higher sum of $15 million per year. It is not clear what Shepard Smith earns in his post-Fox News career.

Real Estate: In 2017, Shepard listed his home in New York City for $4.9 million. The Condo is located a luxurious building called "The Greenwich," which is of course located in the neighborhood of Greenwich Village. His apartment spans 2,341 square feet and includes 2 bedrooms. Smith originally purchased the condo back in 2004 for $1.875 million. This wasn't the first time had attempted to sell this apartment, as it was listed for $4 million back in 2011 before being removed from the housing market a year later.

Notable features include 13-foot ceilings, Venetian plaster walls, and dark hardwood floors. The Greenwich is a building that has a history of housing a range of other high-profile celebs, such as Peter Norton, Michael Kors, and Jon Stewart.

Relationships: In 1987, Shepard Smith married Virginia Donald, whom he met at the University of Mississippi. After a six-year relationship, the pair divorced in 1993. In 2017, Shepard Smith announced that he identifies as a homosexual, and that he has had a boyfriend for many years named Giovanni Graziano. Graziano and Smith first started dating in 2012. 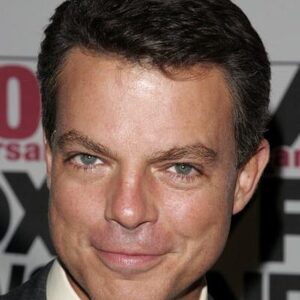