Sean Spicer net worth: Sean Spicer is an American political aide who has a net worth of $6 million. According to his 2017 net worth and asset disclosure, Sean's wealth ranges between $4 and $8 million depending on various valuations metrics. Sean Spicer was born in Manhasset, New York in September 1971. He is a Republican who graduated from Connecticut College and Naval War College.

Spicer served in the United States Navy attaining the rank of Commander. From June 2017 to July 2017 he served as the White House Communications Director under President Donald Trump. Sean Spicer served as the 28th White House Press Secretary from January 2017 to July 2017 under Trump. He served as communications director of the Republican National Committee from 2011 to 2017 and was the chief strategist from 2015 to 2017. Spicer made a number of false and controversial statements as White House press secretary and resigned from his post but remained at the White House in an unspecified capacity for another month. He authored the book The Briefing: Politics, the Press, and the President in 2018. 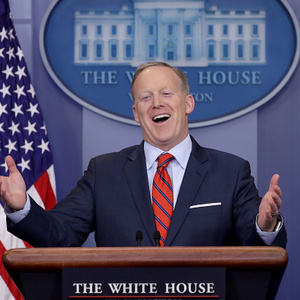