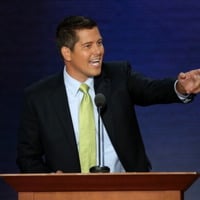 Sean Duffy net worth: Sean Duffy is an American politician, prosecutor, former sports commentator, and reality television personality who has a net worth of $100 thousand. Sean Duffy was born in Hayward, Wisconsin, and earned a degree in Marketing from St. Mary's University. He then went on to earn his law degree from William Mitchell School of Law. He appeared on the reality series, "The Real World: Boston" on MTV, and then went on to appear on various "Road Rules" spin-off challenges. He became a district attorney in 2002, and began working as a competitor and commentator for the ESPN Great Outdoor Games. He holds two speed-climbing records. He was elected to the U.S. House of Representatives in 2010, and again in 2012. He is married to fellow "The Real World" alum, Rachel Campos, whom he met on "The Road Rules: All Stars" in 1998. The pair has eight children together.