Scott Walker net worth: Scott Walker is an American politician who has a net worth of $300 thousand. He is best known for being the 45th Governor of Wisconsin. In 2014 when Walker released personal financial details, he estimated his net worth at NEGATIVE $84,000. Much of that debt was related to student debt for his two college-aged sons but he also owed $10-15,000 in credit card debt.

Scott Walker was born in Colorado Springs, Colorado in November 1967. He is a Republican who married Tonette Tarantino in 1993. Walker served as a Member of the Wisconsin State Assembly from the 14th district from June 1993 to April 2002. From April 2002 to December 2010 he served as the 5th Executive of Milwaukee County. Scott Walker served as the 45th Governor of Wisconsin from January 2011 to January 2019. From November 2016 to November 2017 he was the Chair of the Republican Governors Association. He previously dropped out of the race for Governor of Wisconsin in 2006. He introduced the Wisconsin Budget Repair Bill to limit collective bargaining for most of Wisconsin's public employees. He ran for a third term as governor in 2018 but lost to Democrat Tony Evers. 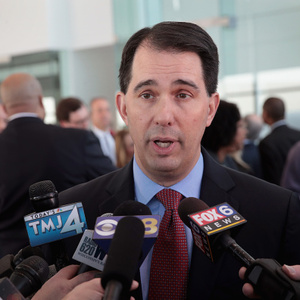