What is Sarah Sanders' Net Worth and Salary?

Sarah Sanders is an American campaign manager and political adviser who has a net worth of $1.5 million. She is perhaps best known for serving as the Press Secretary for the Trump Administration, although she eventually stepped down from this role. As Press Secretary she earned an annual salary of $179,000.

After Trump's departure from office, she announced plans to run as a candidate for the Governor of Arkansas in 2022. Sarah is also known for being the daughter of Mike Huckabee, who is a well-known political figure in the United States. Sanders is a Republican.

Far from being overshadowed by her father, Sarah has become a notable political figure in her own right. In 2010, "Time Magazine" named her as one of the top 40 under 40 in the political world. However, she began her political career by working alongside Mike Huckabee when he campaigned for United States Senate for the first time in 1992. Sarah then served as a field coordinator for Mike's 2002 reelection campaign for the Governor of Arkansas before becoming a senior advisor for Trump's successful 2016 presidential campaign. Outside of her political career, Sarah is a founding partner at Second Street Strategies, a consulting firm for Republican campaigns based in Little Rock, Arkansas.

Sarah Elizabeth Huckabee was born on August 13th of 1982 in Hope, Arkansas. Raised alongside two older brothers by Mike Huckabee and Janet Huckabee, Sarah attended high school in Little Rock and subsequently enrolled at Ouachita Baptist University in Arkadelphia, Arkansas. During her college years, she was elected student body president and became an active member of various Republican student groups. By 2004, she had graduated with a Bachelor of Arts degree with a major in political science. She minored in mass communications.

Sarah Sanders began her political career by assisting with her father's first campaign for US Senate. The bid was unsuccessful, and Sarah later admitted that he did not employ many staff members for his campaign. As a result, Sarah and other family members were heavily involved. Her father later became the governor of Arkansas in 1996. By 2002, she had become a field coordinator for her father's 2002 reelection bid for the gubernatorial seat, which was successful. During this time, she also worked as a regional liaison for congressional affairs at the US Department of Education under President Bush. In 2004, she became involved in Bush's reelection campaign in Ohio, again acting as a field coordinator.

During the next few years, Sarah Sanders became a founding partner of Second Street Strategies and worked on a number of political campaigns within Arkansas. She also later became vice president of Tsamoutales Strategies. During this period, she worked with political figures such as Tim Pawlenty, John Boozman, and Tom Cotton. By 2016, she was working on her father's presidential campaign. When her father's chances clearly became unlikely, she started working with Donald Trump for his own 2016 presidential campaign. During this period, she mostly handled the campaign's communications for coalitions, drawing upon her previous study of mass communications in university. 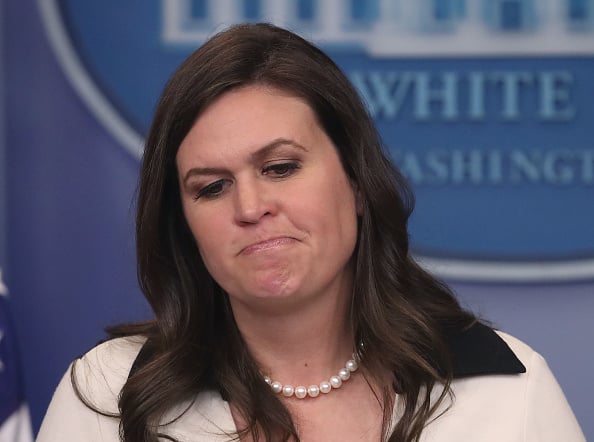 After Trump claimed victory, Sanders won a place in the new administration as the Deputy White House Press Secretary. In 2017, she stepped in for Sean Spicer, who was unavailable at the time, and gave her first press briefing. Over the next little while, Sanders continued to stand in for Spicer on numerous occasions. During this time, she developed a reputation for fiercely defending the Trump administration at all times, later admitting that "it has been a hallmark of the Trump White House never to admit a mistake, never to apologize and never to cede a point."

In 2017, Spicer officially resigned, and Sarah took his place as the new White House Press Secretary. Over the next two years, Sanders answered questions from the press on a number of topics, including Trump's sexual harassment allegations, the family separation policy, and the Red Hen restaurant controversy. She also found herself in hot water after sharing a video originally posted by an InfoWars reporter which showed Jim Acosta refusing to hand a microphone to an intern while having a verbal argument with Trump. In 2019, President Trump announced that Sanders would be leaving her role as Press Secretary. She then became a Fox News contributor, and in 2019 she announced her plan to run for Governor of Arkansas, just like her father.

Sarah Sanders' role as Press Secretary become controversial due to the findings of the Mueller Report. As a result of this report, it became clear that Sanders had admitted to lying while giving a press conference, specifically when it came to James Comey, the former FBI director. She later defended these mistruths, stating that she had acted in the "heat of the moment," and that they were "slips of the tongue." The Mueller Report was intended to condemn Trump, but it failed to do so — something that Sanders seized upon while claiming that the report completely "exonerated" Trump. However, the summary of the report specifically noted that it did not "fully" exonerate the president at the time. This was also seen as controversial.

In 2018, Sarah Sanders was asked to leave a restaurant in Virginia because she worked for the Trump Administration. This created an incident known as the Red Hen restaurant controversy.

In 2019, it was reported that Sanders and her husband had purchased a home in the Little Rock neighborhood of Pleasant Valley for $600,000. 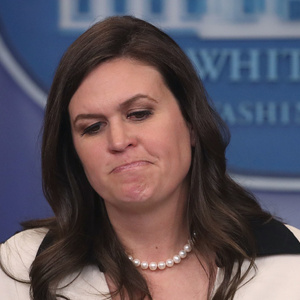