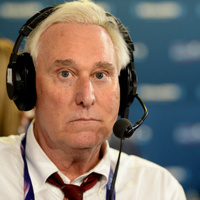 Roger Stone net worth and salary: Roger Stone is an American political strategist, lobbyist and author who has a net worth of $50 thousand. Roger Stone was born on August 27, 1952 in Norwalk, Connecticut. He is known for being one of President Donald Trump's closest advisers, surrogates and strategists. Over the last four decades, Roger has been involved in political campaigns involving prominent Republicans such as Richard Nixon, Ronald Reagan, George H.W. Bush, George W. Bush and more. He was a co-founder of the lobbying firm Black, Manafort, Stone and Kelly which famously represented the lobbying interests of some very controversial foreign regimes such as Filipino dictator Ferdinand Marcos and Congolese dictator Mobutu Sese Seko. Over the years Roger has himself been a controversial figure. He is known for openly deploying dirty tactics to advance a political agenda or campaign. He once referred to CNN commentator as an "Entitled Diva Bitch". He referred to a different CNN commentator as a "fat negro" and a "stupid negro". Many of the most outlandish accusations about a political opponent are said to originate from Roger. He was one of the main figures pushing the narrative that Hillary Clinton has Parkinson's disease. Roger was also the source behind a National Enquirer story about Ted Cruz having 5 extramarital affairs. This is somewhat ironic when you consider the fact that in 1996 the National Enquirer briefly ruined Roger's career by exposing ads that Roger and his wife had placed in a swinger magazine called "Swing Fever" seeking sexual partners. Stone denied the allegations at first but eventually admitted the ads were authentic. The ad read "We are hot, athletic and very fit. We are seeking similar couples or exceptional muscular, well hung, single men. She's 40DD-24-36 and bi. She loves to f**k hard and deep. He's 195 lbs., trim, muscular and 8″ +. She prefers jocks, military men, and body builders. No fat people or smokers need respond. Send photo and phone. No photo, no response! We are interested in DC, VA, MD, NYC, Miami, and LA."

Roger Stone was arrested by the FBI on January 25, 2019 at his home in Ft. Lauderdale. At the time of his arrest he was informed that he was being indicted on charges of obstruction, giving false statements (five counts) and witness tampering. His home in New York City was also raided at the same time.

In several interviews immediately following his arrest Roger claimed to be broke. It's unclear if that claim included his presumptive future legal defense costs which could top $1-2 million. This would be a mighty financial fall for a guy who at the peak of his poltical consulting career in the 80s and 90s reportedly earned $1 million per year.

During a February 21 hearing over a controversial Intagram post, Mr. Stone told a judge that since his arrest his "business has dried up" and he's "exhausted his savings". He claimed he was having trouble putting food on the table and paying his rent.