What was Rob Ford's Net Worth?

Rob Ford was a Canadian politician and businessman who had a net worth of $50 million dollars at the time of his death in 2016. Rob famously served as the 64th mayor of Toronto from 2010 to 2014. His political career in general was often tied to scandals, specifically related to his substance abuse problems.

The business Rob Ford's father started, Deco Labels, is extremely successful. The multi-national printing and labeling business earns an estimated $100 million in revenues per year and has made the Ford family extremely wealthy. Rob died on March 22, 2016 after a battle with cancer.

Ford was born on May 28, 1969 in Etobicoke, Ontario, Canada. He is the youngest of four children born to Ruth Diane and Douglas Ford. His grandparents immigrated to Canada from England. His father worked in business and was co-founder of Deco Labels and Tags, a company which makes pressure-sensitive labels for plastic-wrapped grocery products. He also was a member of the Provincial Parliament.

Ford attended Scarlett Heights Collegiate Institute in Etobicoke, where he played football. He attended a number of football camps throughout his high school career as he hoped to become a professional football player. Following high school, Ford enrolled at Carleton University where he studied political science and was on the football team, though he did not play any games. After a year at Carleton, he left and moved to Toronto without completing his degree. He began working at Deco in sales and then became a director of the company along with his mother and brothers after his father died in 2006.

Ford first ran for Toronto City Council in 1997. Though he lost, he continued building support in the community and ran again in 2000 with an endorsement from the "Toronto Star," defeating incumbent Elizabeth Brown. He remained in the position from 2000 until 2010.

During his time in city council, Ford earned a reputation for his passionate speeches and dramatic antics. He was particularly critical of council spending and opposed large government budgets and tax increases to support government programs that he felt were ineffective. He also went after each councillor's office budget, arguing that by wiping out the perks for each official, the city would save millions of dollars. His exchanges with other councillors often got heated and Ford was accused of making racist remarks on multiple occasions. At the same time, he also developed a reputation for being particularly responsive to his constituents, often personally returning phone calls to citizens reporting problems.

After 10 years on the city council, Ford decided to run for mayor of Toronto in 2010. He was elected mayor with 47% of the vote, a clear majority over the other two contenders. He ran on a populist platform of fiscal conservatism and focused particularly on subway expansion. During the campaign, a number of scandals broke, including Ford's DUI from some years earlier and the fact that he had been banned from high school football coaching due to his fiery antics. However, these only seemed to boost his public support. 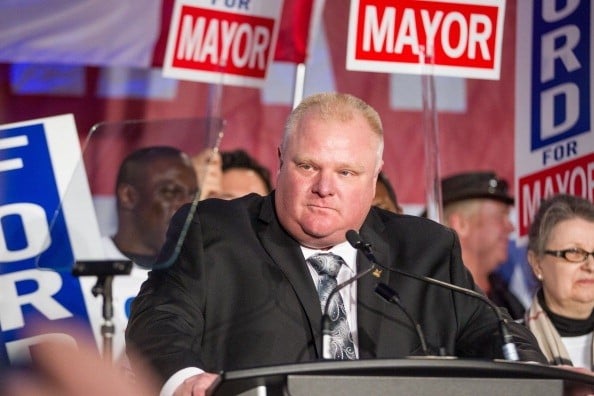 During his time as mayor, Ford privatized garbage pick-up in much of Toronto. He also did not increase property taxes during his first year in office and kept subsequent increases below the rate of inflation. He also focused on reducing or removing other taxes relating to property owning and transfer. He got the city council to endorse his subway extension plan, one of his major campaign promises.

However, near the end of his four-year term, a video surfaced of his using crack cocaine, spurring the council to reduce his powers as mayor. He then went on a leave of absence from May to June in order to deal with his substance abuse problems but returned in July. He intended to run in the 2014 mayoral election but suddenly withdrew his candidacy in September when a tumor was found in his abdomen. His brother, Doug, registered as a mayoral candidate in his play and Ford instead registered as a candidate for his former city councillor position. While his brother was unsuccessful in his bid for mayor, Ford won back his old position. His term as mayor ended on November 30, 2014 and he announced that he intended to run again in 2018.

In August of 2000, Ford married Renata Brejniak. The two had met in high school and had later started dating in 1996 following Brejniak's divorce from her first husband. The couple lived together in Etobicoke with Brejniak's two children, Stephanie and Doug. Their marriage was not without its problems, as the police were called to the Ford home on several occasions to investigate domestic disturbance reports. In 2008, Ford was charged with assault and threatening to kill his wife, though the charges were later dropped. The police were again called twice in 2011 and again in 2012 and 2013, though no charges were ever filed.

Ford struggled with drug and alcohol addiction for much of his life. His problems only grew worse following the death of his father, at which start he started abusing crack cocaine in addition to alcohol. He was seen in public on multiple occasions heavily intoxicated, including during his time in politics, and his staff urged him on multiple occasions to seek treatment. In 2013, a video of him smoking crack found its way to the media, which eventually led him to being stripped of his mayoral duties.

In September of 2014, Ford was admitted to the hospital after developing severe abdominal pain. It was revealed that he had been diagnosed with pleomorphic liposarcoma, a rare form of cancer that arises in fatty tissue. Ford underwent chemotherapy and surgery to remove the tumor. However, in 2015, Ford revealed another tumor was growing on his bladder. After chemotherapy was unsuccessful, Ford was eventually placed in palliative care in 2016 and passed away on March 22 at the age of 46.

Following his death, City Hall began a period of public mourning and a public funeral service was held at St. James Cathedral. Ford was buried at Riverside Cemetery, alongside his father.