Rick Santorum Net Worth: Rick Santorum is an American attorney and Republican Party politician who has a net worth of $5 million. Born Richard John Santorum on May 10, 1958, in Winchester, Virginia, he is best known for his tenure as Pennsylvania's U.S. Senator from 1995 to 2007, as well as for being the Senate's third-ranking Republican from 2001 until 2007.

Once he took a master's degree in business administration from the University of Pittsburgh, and a J.D. from the Dickinson School of Law, young Santorum started to work as an attorney at the law firm Kirkpatrick & Lockhart. It was in 1990 that he got elected to the U.S. House of Representatives as a representative of Pennsylvania, the 18th congressional district at the time. Upon his election, he left the private practice at K&L and eventually joined a group known as the "Gang of Seven". In 1994, he was elected to the Senate, a post that he held for two terms until making futile re-election bid in 2006. While at the Senate, Santorum acquired top GOP leadership and distinguished himself as an ardent social conservative, emphasizing his opposition to abortion and gay marriage. After his departure from the Senate, he went on work as a consultant, lawyer and news contributor. Still politically active, he ran as a candidate for the 2012 Republican Party presidential nomination. However, he ended up as a runner-up to the eventual Republican nominee Mitt Romney. Santorum also had a short lived campaign for the 2016 presidential election. In 2017 he joined CNN as a political commentator. Married with eight children, he currently resides in Great Falls, Virginia. 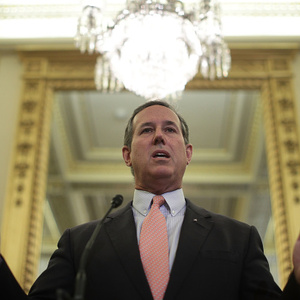