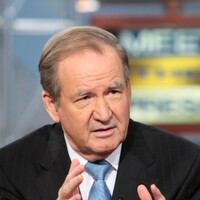 What is Pat Buchanan's Net Worth?

Pat Buchanan is an American political commentator, author, columnist, politician, and broadcaster who has a net worth of $7 million. Pat Buchanan worked in the White House for US presidents Nixon, Ford, and Reagan. He unsuccessfully ran for the Republican presidential nomination in both 1992 and 1996, and sought the Reform Party's nomination for president in 2000. Among his many media ventures, Buchanan co-founded the American Conservative magazine; hosted CNN's "Crossfire"; and contributed to such publications as National Review and Rolling Stone.

Pat Buchanan was born on November 2, 1938 in Washington, DC to nurse and homemaker Catherine and accounting firm partner William. One of nine children, his siblings are Brian, Henry, James, Thomas, John, William Jr., Angela, and Kathleen. Raised Catholic, Buchanan went to the Jesuit-run Gonzaga College High School as a teen. He went on to attend Georgetown University, from which he graduated with a bachelor's degree in English. After being exempted from his military draft due to reactive arthritis, Buchanan went to Columbia University for his graduate studies. He graduated in 1962 with a master's degree in journalism.

At the age of 23, Buchanan began writing for the St. Louis Globe-Democrat. He was soon promoted to assistant editorial page editor. Later, in 1965, Buchanan served as an executive assistant in the law offices of the New York City firm Nixon, Mudge, Rose, Guthrie, & Alexander.

Work in the White House

In 1966, Buchanan became the first adviser hired by the presidential campaign of Richard Nixon. For the candidate, he focused on the areas of political strategy, policy positions, and PR. After Nixon was elected, Buchanan became his assistant and speechwriter. He remained as his assistant throughout the Watergate scandal, during which time he encouraged him to burn the White House tapes. Following Nixon's resignation in 1974, Buchanan served as a special assistant to Gerald Ford for a brief period of time.

Buchanan returned to the White House in early 1985 to become communications director under Ronald Reagan. He remained in this position through early 1987.

In 1992, Buchanan launched his first campaign for the Republican presidential nomination as a challenger to the incumbent George H. W. Bush. Running on a racist, homophobic platform, he ultimately failed to win a single primary. Buchanan sought the Republican nomination for president again in 1996, but lost to Bob Dole.

Following his departure from the Republican Party in late 1999, Buchanan joined the Reform Party. He subsequently launched his campaign for that Party's presidential nomination, which he ended up winning. As the Reform candidate, Buchanan proposed withdrawing the US from the United Nations and abolishing the IRS and several executive federal departments. He also promoted the creation of a white nationalist Christian ethnostate. Ultimately, in the 2000 presidential election, Buchanan finished fourth. He later began identifying as an independent. 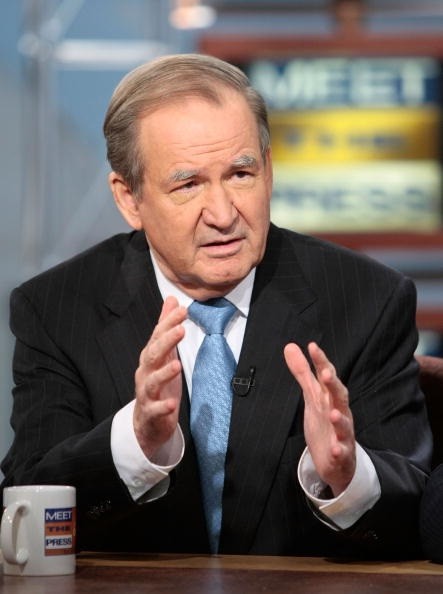 Buchanan has had a prolific career as a political commentator on television and radio. Early on in his career, he co-hosted the daily radio show "Buchanan-Braden Program"; gave daily commentaries on NBC radio; hosted CNN's current events debate television show "Crossfire"; and was a regular panelist on the public affairs television program "The McLaughlin Group." Later, in 1993, he hosted the radio talk show "Buchanan and Company."

In 2002, Buchanan joined Bill Press to co-host the MSNBC debate show "Buchanan & Press"; the program was canceled the following year. Still, Buchanan remained at MSNBC as a political commentator, and made regular appearances on the network's talk shows. In 2011, he was suspended from MSNBC due to the racist content of his new book "Suicide of a Superpower."

Along with journalist Taki Theodoracopulos and former New York Post editorial page editor Scott McConnell, Buchanan founded the American Conservative magazine in 2002. Four years after that, he began contributing to the far-right white nationalist website VDARE. Buchanan has also written for such conservative publications as National Review, the Occidental Observer, and Human Events. Additionally, he has authored many books since 1973.

Known for his vehement antisemitism, Buchanan has been called an "unrepentant bigot" by the Anti-Defamation League. While working for Reagan in the 80s, he reportedly made attempts to halt the deportation of suspected former Nazis from the Eastern Bloc.