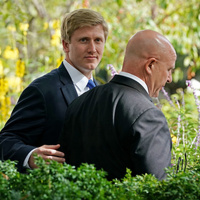 Nick Ayers net worth: Nick Ayers is an American political strategist who has a net worth of $30 million. Nick Ayers was born in Cobb County, Georgia in August 1982. He is best known for being Chief of Staff to the Vice President Mike Pence starting in July 2017. Ayers is a Republican who graduated from Kennesaw State University and the University of Surrey. Before his current role he was national chairman for Mike Pence's vice-presidential campaign in 2016. Ayers was also the executive director of the Republican Governors Association from 2007 to 2010. He has served as principal of C5 Creative Consulting and serves as a leading figure in the pro-Trump nonprofit organization America First Policies. Ayers served as a senior advisor to Trump's transition team from November 2016 to January 2017. Time named him to their list of the 40 most influential people in politics under 40 in 2010. According to his personal financial disclosure, Nick Ayers' net worth is somewhere in the range of $12 – 60 million.