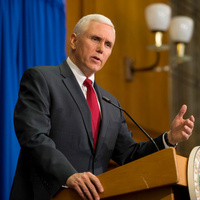 What is Mike Pence's Net Worth and Salary?

Mike Pence is an American politician who has a net worth of $4 million. Mike Pence had a modest net worth prior to becoming Vice President (much more detail on this in the next paragraph). After leaving the White House, Pence has made several million dollars from public speaking fees and a seven figure book advance. Mike Pence is most widely known for being Donald Trump's Vice President from 2016 to 2020. Prior to being VP he was the governor of Indiana from 2013 to 2017 and a member of the US House of Representatives from 2001 to 2013. Prior to entering politics, Pence was a talk-radio host in Indiana. Mike ran for congress several times during the late 80s and 90s, but lost. He won his first election in 2000. He served in congress from 2000-2012 until he was elected governor of Indiana. He has been married to his wife Karen since 1985, and they have three children. He was raised Catholic but became a born-again nondenominational Christian while in college. A staunch rightwing Christian nationalist, Pence is known for his anti-abortion and anti-LGBT stances, and for being a target of the insurrectionists who stormed the US Capitol on January 6, 2021.

In his financial disclosure released in August 2016, Pence revealed that at that point he had a modest net worth that is mostly made up of a pension that was worth roughly $500 thousand. His primary source of income prior to becoming VP was his Indiana governor's salary.

According to a book released in 2019, the Mike and Karen Pence were financially destitute when they joined Donald Trump's Presidential campaign. On the evening of the election Karen reportedly blew up at Pence:

"What are going to do Mike?? We don't have any money! Who's going to pay for my inaugural gown?".

According to the same book, which was written by Tom LoBianco, at some point in the decades before becoming VP, Mike lost $1 million he had inherited from his father on failed investments. He also lost around $700,000 in stock he held in his family's gas station business which went bankrupt in 2001.

Mike Pence was born on June 7, 1959 in Columbus, Indiana as one of six children of Edward and Nancy. He is of German and Irish descent. Pence was educated at Columbus North High School, graduating in 1977. He went on to earn a BA in history from Hanover College in 1981, followed by a JD from Indiana University – Purdue University Indianapolis in 1986. While in college, Pence abandoned Catholicism and became a born again evangelist.

Following his graduation from law school, Pence became an attorney in private practice. He first entered politics in 1988 when he unsuccessfully ran for Congress against Democratic incumbent Philip Sharp; he ran another failed campaign against Sharp in 1990. During this time, Pence began a radio career hosting talk shows on local Indiana stations such as WRCR-FM and WNDE. He also hosted a weekly public affairs television show on the Indianapolis station WNDY beginning in 1995.

In 2000, Pence ran for the US House of Representatives, ultimately winning the seat in Indiana's 2nd congressional district. During his tenure in office from 2001 to 2013, he was a member of the conservative extremist Tea Party Caucus. In early 2009, he was elected as the chairman of the House Republican Conference. Overall, Pence introduced 90 bills and resolutions during his 12 years in the House, none of which became law.

In the 2012 Indiana gubernatorial election, Pence secured the Republican nomination to succeed the term-limited incumbent Mitch Daniels. He ultimately beat Democrat John R. Gregg in the closest gubernatorial election in half a century. Upon becoming governor in early 2013, Pence issued the largest tax cut in the history of Indiana and advocated for greater funding to private education. Notoriously, he also signed bills to restrict abortions. One of his most controversial pieces of legislation was the Religious Freedom Restoration Act, which received strong backlash from the business community, the LGBTQ community, and even some more moderate members of the Republican Party. The protests eventually prompted Pence to amend the bill to prohibit discrimination based on sexual orientation and gender identity. 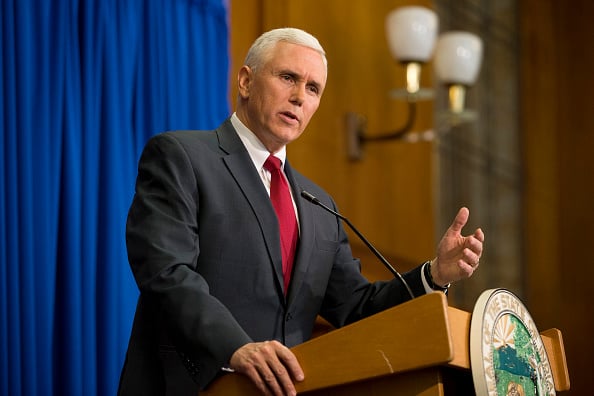 Although Pence ran for a second term as governor of Indiana, he withdrew from the race in the summer of 2016 when he was chosen as the running mate of Donald Trump. The pair went on to win their ticket, and Pence was inaugurated as vice president of the United States in January of 2017.

Early on in his position, he chaired the reestablished National Space Council. Pence later became a key player in the Trump-Ukraine scandal and Trump's consequent first impeachment, with Pence defending the president's corrupt phone call with Ukrainian president Volodymyr Zelensky.

In early 2020, during the COVID-19 pandemic, Pence became chairman of the White House Coronavirus Task Force, and was heavily criticized for failing to take appropriate measures to mitigate the spread of the disease. Moreover, he made several false or misleading claims about the state of the pandemic. Facing terrible public approval going into the 2020 presidential election, Pence and Trump were ultimately routed by Joe Biden and Kamala Harris in one of the biggest defeats in US history.

Following Joe Biden's victory, Trump and his campaign refused to concede. They went on to launch numerous attempts to overturn the election, including by making bogus allegations of fraud, filing over 80 unsuccessful lawsuits in various states, and illegally pressuring Republican officials, lawmakers, and the Justice Department to take actions to overthrow the election results. This sustained attack on democracy culminated in the attempted insurrection of the US Capitol on January 6, 2021 during the counting of the Electoral College votes. Although Trump put intense pressure on Pence to block Biden's certification as president, Pence refused to relent and went through with the certification. Meanwhile, many of the insurrectionists chanted "Hang Mike Pence," a mantra Trump allegedly vocally embraced behind closed doors.

Since leaving office, Pence has sought to distance himself from Trump. He has endorsed candidates in several Republican primary elections in opposition to his former boss's candidates, such as Georgia governor Brian Kemp and Arizona governor Karrin Taylor Robson. However, Pence continues to advance his rightwing extremist views, including his opposition to abortion, LGBTQ rights, and immigrant rights.


In the spring of 2021, he signed a "seven-figure" book deal with Simon & Schuster. Under the terms of the deal, the advance will cover two books, including an autobiography. Sources have pegged the value of the deal in the $3-4 million range.

As a student in law school, Pence met Karen Batten during Mass. They married in 1985. Together, they have three children named Michael, Charlotte, and Audrey. Michael is a first lieutenant and pilot in the US Marine Corps, while Charlotte is an author.