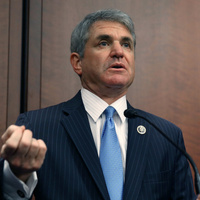 Michael McCaul Net Worth: Michael McCaul is an American politician who has a net worth of $200 million. Born Michael Thomas McCaul, Sr. on January 14, 1962, in Dallas, Texas, he has been serving as the U.S. Representative for Texas's 10th congressional district since 2005. Having taken his Juris Doctor from St. Mary's University in 1987, McCaul also attended Harvard University and took courses in the Kennedy School of Government. He went on to work as an attorney and a federal prosecutor before he fully dived into politics. Actually, McCaul spent some time serving as the Chief of Counterterrorism and National Security for Texas's branch of the US Attorney's office, as well as he worked under the Department of Justice's Public Integrity Section. It was in 1998 that he was appointed Deputy Attorney General remained to serve in that capacity until 2002. Two years later, he ran for the U.S. House of Representatives and won a crowded Republican primary in the newly created 10th District. What comes as an interesting fact is that the district, stretching from Austin to Houston, was considered to be so heavily Republican that no Democratic candidate ever filed, until McCaul effectively took the seat. Every second year since, he has been re-elected and from the beginning of the 113th Congress, he has also been the Chairman of the House Committee on Homeland Security. An active member of the Republican Party, Michael McCaul is currently said to be the most wealthy member of Congress.