What is Michael Flynn's Net Worth and Salary?

Michael Flynn is a retired US Army lieutenant general and politician who has a net worth of $600 thousand. He served in the military from 1981 to 2014 and received many medals. Flynn served as the Director of the Defense Intelligence Agency from 2012 to 2014 under President Barack Obama. In 2017 Flynn served as the 25th National Security Advisor under President Donald Trump. He was the shortest-serving National Security Advisor in US history, having held the position for just 24 days. Flynn resigned from his post as National Security Advisor after it was exposed that he had lied to his superiors as well as the FBI about his correspondences with Russian ambassador Sergey Kislyak. Michael Flynn is also the founder of the intelligence services firm Flynn Intel Group.

Facing mounting legal bills, in 2018 Flynn was forced to sell his Virginia home. His family also set up a legal defense fund which has raised an undisclosed amount of money. The financial toll of Flynn's legal issues has reportedly been devastating.

Michael Flynn was born on Christmas Eve, 1958 in Middletown, Rhode Island as one of nine children of banker Charles and real estate worker Helen. His youth was marked by both upstanding behavior and unscrupulous activities. In 1972, he was honored by the local town council for rescuing a pair of toddlers from an oncoming car. However, Flynn also served time in juvenile detention for what he described as "unlawful activity." As a teen, he went to Middletown High School, and for his higher education, enrolled at the University of Rhode Island. Flynn struggled in college, but decided not to drop out after being awarded a three-year scholarship from the ROTC. He graduated in 1981 with a BS in management science. Subsequently, Flynn went to Golden Gate University, where he earned his MBA in telecommunications; he went on to obtain further master's degrees from the United States Army Command and General Staff College and the Naval War College.

In 2011, Flynn became lieutenant general and was appointed assistant director of national intelligence in the Office of the Director of National Intelligence. The following year, he was nominated by President Obama to become the 18th director of the Defense Intelligence Agency. In this position, Flynn became the first US officer to be permitted entry to the Russian military intelligence headquarters. His close connection with a Russian woman, as well as his disorderly style of management, caused many colleagues to doubt his efficacy. In 2014, Flynn announced his retirement, which was reportedly forced by the DIA due to his insubordination.

After leaving the military, Flynn founded the intelligence services consulting firm Flynn Intel Group with his son. Through the company, he was paid over $65,000 by companies with Russian connections; he also provided services to Turkey. While working at his firm, Flynn served on the boards of a number of organizations, including Patriot Capital, Drone Aviation, and GreenZone Systems. Ultimately, Flynn Intel Group shut down in 2016.

In 2016, Flynn was nominated by Trump to become his National Security Advisor. President Obama warned against the nomination, asserting that Flynn would be a threat to national security due to his dubious ties to Russia and Turkey. Ultimately, Flynn accepted the nomination, and went on to confirm Obama's worries when reports came out about his correspondences with Russian ambassador Sergey Kislyak. Notably, Flynn had met with Kislyak and Jared Kushner at Trump Tower in 2016, and had subsequently spoken with him several times over the phone. During this time, President Obama expelled 35 suspected Russian intelligence agents from the US in response to Russia's interference in the 2016 presidential election. Flynn and Kislyak discussed how to undermine this and other sanctions; Flynn then lied about his discussions to Reince Priebus, Mike Pence, and Sean Spicer. Later, during an FBI investigation, he lied to FBI agents as well. When this was all exposed in February of 2017, Flynn resigned as National Security Advisor; his tenure of 24 days was the shortest in the office's history. 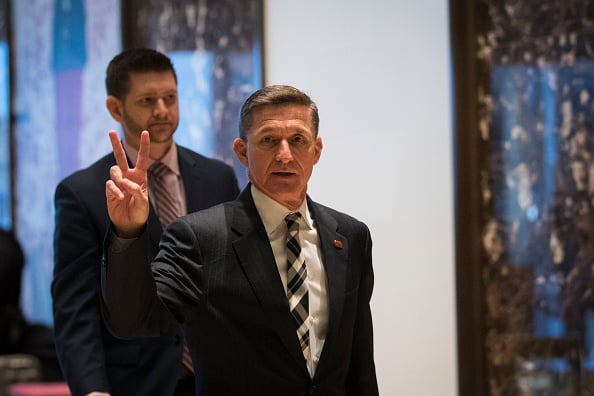 In December of 2017, Flynn made a deal with Special Counsel Robert Mueller to plead guilty to a felony count of knowingly lying to the FBI about his correspondences with Kislyak. His sentencing was delayed a number of times; eventually, in early 2020, he decided to withdraw his guilty plea. At the order of Attorney General William Barr, the Justice Department filed a court motion to remove all charges against Flynn. Later, in November of 2020, Flynn was pardoned by Trump, and in December, was cleared of his criminal case by Judge Sullivan.

Just days after his pardon, Flynn began undermining democracy again when he supported Trump's efforts to overturn the 2020 presidential election. Specifically, he called on Trump to declare Martial Law and have the military organize a national revote; he also participated in a "Stop the Steal" rally in Washington, DC.

Flynn has been known to perpetuate numerous debunked right-wing conspiracy theories. He claimed that the 2020 presidential election was stolen, and that the COVID-19 pandemic was engineered to distract the American populace from that notion. Flynn also endorsed the conspiracy that Venezuela and China had seized control of voting machines during the election.

In 1981, Flynn wed his high school sweetheart Lori Andrade, the daughter of a prominent Portuguese family. The couple has two children. 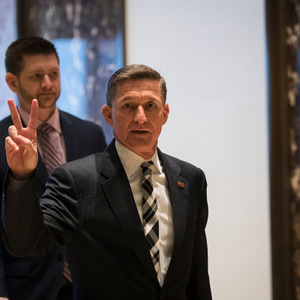