Martin Dempsey Net Worth: Martin Dempsey is an American United States Army general and the current Chairman of The Joint Chiefs of Staff who has a net worth of $1.5 million. Martin Dempsey was born in Jersey City, New Jersey in March 1952. Dempsey served as the 37th Chief of Staff of the Army from April 2011 until September 2011.

He was Commanding General, U.S. Army Training and Doctrine Command from December 2008 to April 2011 and Acting Commander, U.S. Central Command from March 2008 to October 2008. Dempsey has also served as Deputy Commander, U.S. Central Command from August 2007 to March 2008, Commanding General, and Multi-National Security Transition Command – Iraq from August 2005 to 2007. He became the 18th Chairman of the Joint Chiefs of Staff in October 2011 and is the highest ranking military officer in all of the United States Armed Forces. He graduated from the United States Military Academy at West Point and has Master's degrees from Duke University, United States Army Command and General Staff College, and National War College. Dempsey has served in the Persian Gulf War and Iraq War. He has been awarded two Defense Distinguished Service Medals, four Army Distinguished Service Medals, three Defense Superior Service Medal Legions of Merit, and two Bronze Stars with Valor. 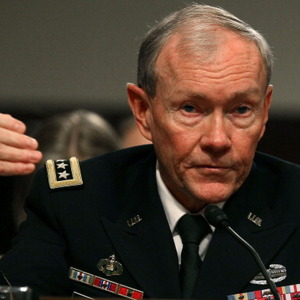