How much is Marco Rubio Worth?

Marco Rubio net worth and salary: Marco "Little Marco" Rubio is an American politician who has a net worth of $400 thousand according to his most recent financial disclosure. Marco Rubio was born in Miami, Florida in May 1971. He graduated from the University of Florida and the University of Miami Law School. Rubio was a City Commissioner for West Miami in the late 1990s. He is a Republican who served as Member of the Florida House of Representatives from 2000 to 2009. During that time Rubio served as Speaker of the Florida House of Representatives from 2007 to 2009. Since 2011 he has served as a United States Senator from Florida. He won the general election with 49% of the vote in 2010. At the time, Rubio was one of only three Latinos in the Senate, along with Ted Cruz and Bob Menendez. Rubio announced in April 2015 that he was a candidate for President in 2016. He ultimately did not win his party's nomination. Rubio has also authored the books 100 Innovative Ideas for Florida's Future, An American Son: A Memoir, and American Dreams: Restoring Economic Opportunity for Everyone. He has been married to Jeanette Dousdebes since 1998. 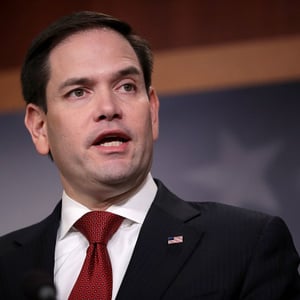