Lynne Cheney Net Worth: Lynne Cheney is the former Second Lady of the United States, a novelist, and ex-talk show host who has a net worth of $100 million. That is a combined net worth with her husband, former Vice President Dick Cheney.

Born in Casper, Wyoming, in 1941, Lynne Cheney studied English literature at Colorado College and later earned her master's degree from the University of Colorado at Boulder and her Ph.D. from the University of Wisconsin at Madison. In the late '80s and early '90s, Cheney worked as the chairwoman for the National Endowment for the Humanities and later founded the American Council of Trustees and Alumni. She co-hosted CNN's "Crossfire" from 1995 until 1998 and sat on the board of directors at Lockheed Corporation. She is a director of the Reader's Digest Association and works closely with the American Enterprise Institute for Public Policy Research. Cheney became Second Lady when George W. Bush selected her husband, Dick Cheney and Halliburton CEO, as his running mate and won the presidency. She served from 2001 until 2009, and frequently spoke out against violence in the media and pop culture, including crude music, rap lyrics, and gory video games. She is the author of a variety of books, including "American Memory: A Report on the Humanities in the Nation's Public Schools", "When Washington Crossed the Delaware: A Wintertime Story for Young Patriots", and "Blue Skies, No Fences: A Memoir of Childhood and Family". She has been married to her husband since 1964 and they have two daughters together, Elizabeth and Mary. Both Lynne and Dick have expressed their public support for gay marriage, as one of their daughters is a lesbian. 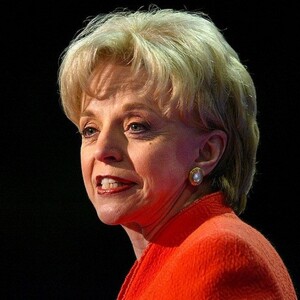