What is Lindsey Graham's Net Worth?

Lindsey Graham is a lawyer and politician who was elected as a Senator from South Carolina in 2003. Lindsay Graham has a net worth of $2 million. Before becoming a Senator he worked as a lawyer in private practice, and served four terms in the United States House of Representatives for South Carolina's 3rd congressional district. After seeking and losing the Republican nomination for president in 2016, Graham became notorious for his extreme flipping of positions, including his sucking up to Donald Trump, whom he had previously despised.

According to Lindsey's self-released tax returns, he earned a total of $2.1 million in income between 2008 and 2019. According to his very first federal finance disclosure in 2008, his net worth at that point was $800,000. In the years since, his net worth disclosures have reported a number that fluctuates between $1.5 million and $2 million.

Lindsey Graham was born in 1955 in Central, South Carolina. His parents, Florence and Millie, ran a restaurant and bar called the Sanitary Cafe. Graham is of Scots-Irish ancestry. He went to D. W. Daniel High School, and then joined the Reserve Officers' Training Corps. Following the deaths of his parents when he was in his early 20s, Graham attended the University of South Carolina so he could be near home to serve as his young sister's legal guardian. After graduating with a bachelor of arts in psychology in 1977, he went on to obtain his J.D. from the University of South Carolina School of Law in 1981.

In 1982, Graham was commissioned as an officer in the Judge Advocate General's Corps in the United States Air Force. Over the following years, he served as a defense attorney, and then became the Air Force's chief prosecutor in Europe, with his base in Frankfurt, Germany. After leaving the Air Force, Graham served in the South Carolina Air National Guard through 1995. Concurrently, from 1993 to 1995, he also served in the South Carolina House of Representatives.

In 1994, Graham ran to succeed incumbent Democratic Congressman Butler Derrick for South Carolina's 3rd congressional district seat. He won the Republican primary with 52% of the vote, and then won in the general election with 60% of the vote. Graham went on to be reelected to three more terms through 2002. During his tenure, he served on the Committee on International Relations, the Committee on Education and the Workforce, the Committee on the Judiciary, and the Committee on Armed Services.

Graham ran to succeed US Senator Strom Thurmond in the 2002 election for the Senate. Winning the Republican primary unopposed, he went on to defeat Democratic nominee Alex Sanders in the general. He was reelected three more times in 2008, 2014, and 2020. Graham has formed a reputation in the Senate as a war hawk. 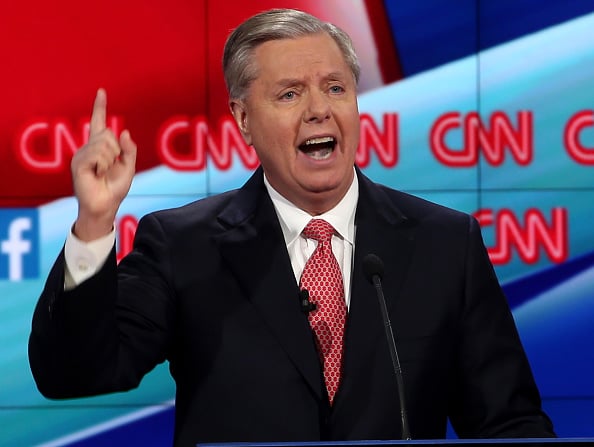 Over the years, Graham has become noted for his hypocritical reversal of positions, especially in regard to his relationship with Donald Trump. During his run for the Republican nomination for president in 2015, Graham was vocal about his contempt for his opponent. He called Trump a "jackass," and emphasized the fact that he was a xenophobe and a religious bigot. However, just after Trump's election, Graham had done a complete about-face, suddenly becoming a fervent supporter of the man he deemed unfit for president. He went on to back Trump's racist positions and corrupt dealings in the White House, and advocated for his reelection.

Following Joe Biden's victory in the 2020 presidential election, Graham was one of the most outspoken perpetuators of the Big Lie that the election had been rigged. Disputing the count in Georgia, where Biden won by around 14,000 votes, Graham called Georgia Secretary of State Brad Raffensperger to ask him to disqualify legally cast mail-in ballots. The phone call was examined by the Fulton County, Georgia district attorney as part of a criminal investigation into efforts to overturn the state's election results.

Despite having to be evacuated from the Capitol during the rightwing insurrection on January 6, 2021, Graham still voted against the impeachment of Donald Trump, who incited the rioters. Moreover, in May, he blocked investigation into the insurrection by voting against the creation of an independent commission.

Early on, Graham was known for his willingness to work in a bipartisan manner with Democrats. He voted to confirm President Obama's Supreme Court nominees Elena Kagan and Sonia Sotomayor, criticized the Tea Party, and compromised on issues such as campaign finance reform and immigration reform. However, his positions have grown more reactionary and extreme as time has gone by. In one of his most hypocritical moves, he voted to appoint a new Supreme Court justice just one day after Ruth Bader Ginsburg passed away in 2020, despite his claim in 2016 that Supreme Court vacancies should never be filled in a presidential year.

Among his other conservative positions, Graham is anti-immigration, anti-gun control, anti-abortion, and anti-vaccine. In 2002, he voted for the Iraq Resolution, and has since advocated for military interventionism in places including Iran, Afghanistan, Venezuela, Libya, and Yemen. Graham is also opposed to LGBTQ rights, and is a denier of climate change.

Graham has never married and has no kids. He resides in Seneca, South Carolina, where he is a member of the Corinth Baptist Church. 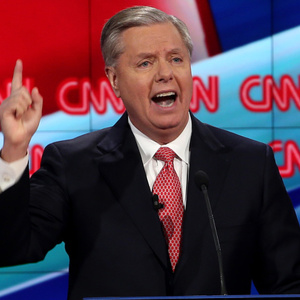