How much is Linda McMahon Worth?

Linda McMahon Net Worth: Linda McMahon is an American businesswoman and politician who has a net worth of $1.6 billion. In addition to being the wife of WWE founder Vince McMahon, Linda is an accomplished businesswoman and a successful politician. She founded Titan Sports, Inc. along with her husband – which later became WWE, Inc. She has served as both the president and the CEO of this company during a period that stretched between 1980 and 2009.

Under Linda's leadership, the company grew from a small business to a massive multinational corporation. Although she was rarely in front of the camera, she did make a few notable appearances at events such as WrestleMania X-Seven.

In 2009, McMahon left the WWE to embark on a political career. She first ran as a Republican, hoping to gain a seat as a US Senator from Connecticut. Linda self-funded two bids for the U.S. Senate, costing her $100 million in campaign expenses. She lost twice – once to a Republican nominee and once to a Democratic Representative.

In 2016 President Donald Trump announced that he was nominating Linda to be his new Administrator of the Small Business Administration. Her nomination was eventually approved and confirmed in 2017. In 2019, she stepped down from her position and began working on Trump's re-election campaign. McMahon was later named Chairwoman of the America First Action, Super PAC geared towards Trump supporters.

Early Life: Linda Marie Edwards was born on October 4th of 1948 in New Bern, North Carolina. Linda grew up as an only child and a self-described tomboy, becoming passionate about sports while her parents worked at a Marine Corps base. Although Edwards was raised in a Baptist household, she later converted to Roman Catholicism.

Linda met Vince McMahon at the age of 13. He was 16 at the time, and the pair began dating during high school. Vince became very close with Linda's family, and he asked Linda to marry him after she had graduated. At the age of 17, Linda married Vince. She then attended East Carolina University and earned a bachelor's degree in French with a certification to teach. By the early 70s, Vince had joined the family business – the World Wide Wrestling Foundation. During this period, Vince and Linda welcomed their first two children into the world.

Career: Although Linda began her career working in a corporate law firm, she was soon forced to consider a different path. She and Vince declared bankruptcy at one point, and Vince was working 90-hour weeks at a quarry. Eventually, Vince founded Titan Sports, Inc. Linda started to play a more central role in the company before Vince purchased Capital Wrestling from his father.

McMahon first became president of Titan Sports, Inc. in 1993. She then became CEO in 1997. Among other things, Linda helped develop product merchandising deals with outside vendors. The company started to sell popular action figures and other products. She also oversaw several controversial moments, such as McMahon's memorandum to Pat Patterson (the Tip-Off Memo), a federal steroids investigation, and a new PG rating.

McMahon actually started her political career as a member of the State Board of Education in Connecticut. She then made two attempts to win a seat on the U.S. Senate before serving with the Trump administration.

Assets Disclosure: In 2017, it was reported that Vince and Linda McMahon had disclosed "billions" in assets. The couple's joint financial disclosure filing revealed that they owned between $938 and $1.1 billion in various assets. These assets included real estate, WWE stock, hedge fund investments, and other forms of property.

The document was 32 pages long, and it provided fans and political observers alike with an unprecedented look into the McMahon empire. The document highlighted the couple's $8-million estate in Greenwich, which includes access to a nearby polo field. The document also revealed the existence of a $3-million penthouse suite in a Stamford luxury condo building named Trump Parc. Outside of Connecticut, the couple owns a loft in TriBeCa worth between $5 million and $25 million. Further properties are dispersed across New York City, Las Vegas, and Boca Raton.

Aside from these major assets, the financial disclosure also revealed the fact that Linda had attempted to distance herself from the WWE and other businesses – ostensibly in preparation for her upcoming political career. Most of her assets are listed under her husband's name, which gives her some level of protection against accusations of political conflicts of interest. That being said, experts agreed that simply transferring the title of an asset to your spouse is not really enough to free yourself from these accusations.

In terms of cash, the disclosure also revealed about $12 million scattered between 10 different U.S. bank accounts – all under Vince's name. Vince also has between $25 million and $50 million in a Morgan Stanley money market account. Although Vince appears to be the only spouse who owns WWE stock (with a net worth of about $782 million), this was later called into question. In separate documents, Linda was listed as owning 1.5% of WWE shares.

The couple is also very active in public bond investments. They own between $4.7 and $15.5 million in general obligation bonds for seven cities and towns across Connecticut. Finally, the couple made a personal loan somewhere between $5 million and $25 million to a family member – believed to be one of their children.

Personal Life and Real Estate: Vince and Linda McMahon were married on August 26, 1966 in North Carolina. They met in church as young teenagers. They have two children, Shane and Stephanie, who both have had a hand in the family business. They also have six grandchildren. The McMhaons live in Greenwich, Connecticut, which is a roughly 30-minute drive from WWE's corporate headquarters in Stamford, CT. Their Greenwich mansion is reportedly worth $40 million. They also owned a $12 million penthouse in Manhattan and a sports yacht named "Sexy Bitch". 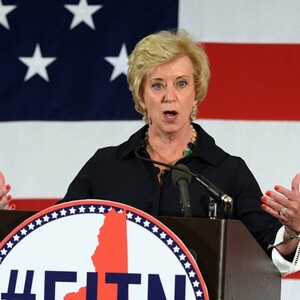