Early Life: Kellyanne Elizabeth Fitzpatrick was born in Camden, New Jersey on January 20, 1967. Her father owned a trucking company and her mother worked at a bank. When Kelly was three, her father abandoned the family. Kelly was raised by her mother, grandmother and two unmarried aunts. She spent summers picking blueberries at a farm in Hammonton, New Jersey. She would later credit this job as the source of her lifelong work ethic.

Media Appearances: Kellyanne has made countless media appearances over the years. She has appeared as a political commentator on CNN, Fox News, and Fox Business. Conway has appeared on TV series including Good Morning America, Meet the Press, Real Time with Bill Maher, and Hannity.

Donald Trump: She initially endorsed Ted Cruz for the 2016 Presidential campaign before becoming senior advisor for Donald Trump. Her association with Trump dates back at least two decades. She even lived in Trump Tower from 2001 to 2008, sitting on the building's condo board for a time. Ted Cruz suspended his campaign in June 2016. On July 1, 2016 it was announced that Kellyanne had been hired as a senior advisor to Donald Trump's presidential campaign.

Her role with Trump was initially supposed to very narrowly focused on female voters but the role was eventually expanded as Conway proved herself a highly capable campaign manager. She was officially promoted to campaign manager on August 19, 2016.

Controversies: During her time as counselor to President Donald Trump, Kellyanne has found herself dealing with a number of controversies. She has outright lied and/or misstated facts on numerous occasions. She raised eyebrows in January 2017 when she claimed falsehoods told by then White House press secretary Sean Spicer were actually "alternative facts". A month later while appearing on Chris Matthews' show "Hardball", Conway referred to an entirely made up event that she called the "Bowling Green massacre" when justifying President Trump's immigration ban. During her time in office she has been accused of violating the Hatch Act on several occasions. For example, after it was announced that Nordstrom had dropped Ivanka Trump's products, Conway used part of her appearance on "Fox & Friends" to promote Ivanka's personal brand.

Personal Life: Kellyanne has been married to lawyer George T. Conway III since 2001. They have four children including Claudia Conway who made headlines in August 2020 after announcing her intention to seek emancipation from her parents. Kellyanne and George have a notoriously strange and likely strained relationship, as he has been one of Donald Trump's most vocal critics.

Financial Details: A financial disclosure released in April 2017 showed that Kellyanne personally earned approximately $900,000 in 2016. The same disclosure estimated that she and George controlled assets valued at between $11 and $44 million.

Real Estate: As we mentioned previously, Kellyanne and George lived in a Trump Tower condo in New York City from 2001 to 2008. In February 2017 they paid just under $8 million for a mansion in Washington D.C.. Back in her native New Jersey, they still own a $6 million home in the town of Alpine, which is frequently ranked as one of the most expensive zip codes in America. 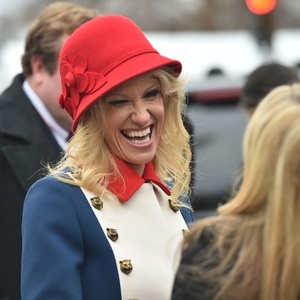