What is Kayleigh McEnany's net worth and salary?

Kayleigh McEnany is an American political commentator and author who has a net worth of $1 million. She is best known for being the White House Press Secretary under President Donald Trump. In January 2021 Kayleigh announced she was taking a job with Fox News. On March 2, 2021 Kayleigh officially joined Fox News as an on-air contributor and she was subsequently promoted to co-hosting the show "Outnumbered."

Kayleigh McEnany was born in Tampa, Florida in April 1988. After graduating from the Academy of the Holy Names she went on to Georgetown University where she majored in international politics in the School of Foreign Service.

After Georgetown she landed a job as a producer on the Mike Huckabee Show. She spent three years on the show then enrolled at the University of Miami School of Law. She ultimately transferred to Harvard Law School where she graduated in 2016. While in law school Kayleigh began making various media appearances. For a time she was a paid commentator for CNN.

During the run up to the 2016 Presidential election, Kayleigh made several disparaging remarks about then-candidate Donald Trump. For example, she stated that "Donald Trump has shown himself to be a showman" and that it was "unfortunate" to call him a Republican. She also criticized his comments about Mexicans "racist".

She became the national spokesperson for the Republican National Committee in 2017. McEnany authored the book The New American Revolution: The Making of a Populist Movement in 2018. 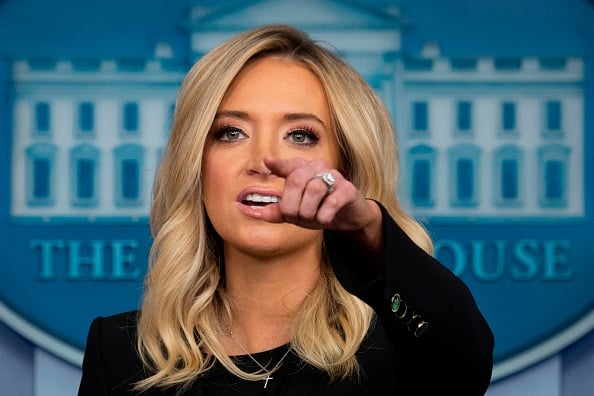 In 2017 Kayleigh married Tampa Bay Rays pitcher Sean Gilmartin. They have a daughter named Blake Avery Gilmartin. Sean is currently a minor league player. He did previously play in the Majors with the New York Mets and Baltimore Orioles. He was the 28th overall selection in the 2011 draft, signing a deal with the Atlanta Braves that came with a $1.134 million signing bonus.

During her time working as White House Press Secretary, Kayleigh McEnany's salary was $183,000 per year.

On January 26, 2021, one week after Donal Trump Presidency ended, Kayleigh revealed she had been hired by Fox News. As part of her hiring, she had to release a Federal financial disclosure. That disclosure revealed that in 2020 Kayleigh earned the following amounts: