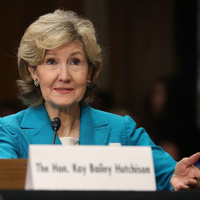 Kay Bailey Hutchison Net Worth: Kay Bailey Hutchison is an American politician who has a net worth of$3.6 million. Born Kathryn Ann Bailey on July 22, 1943, in Galveston, Texas, she is best known for being a former United States Senator from Texas. A member of the Republican Party, she won a special election in Texas, joining Kassebaum as a fellow female Republican senator. Thus, she became the first Texas woman to represent the country in the U.S. Senate, as well as the first Texas U.S. senator to receive more than four million votes in one election. By the end of her tenure, she became the most senior female Republican senator and the fifth most senior female senator in the States. In the post Senate period, she didn't retire but remained active in various spheres of public life. As of 2012, she also joined the law firm Bracewell Giuliani.